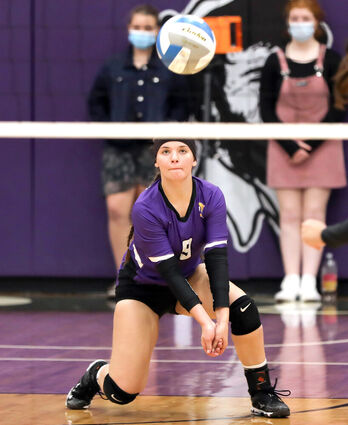 Laura Hecht makes a pass during a 3-0 sweep of Duluth Denfeld earlier this month. The Lumberjacks' 20-6 record gave them the No. 2 seed in the section and earned Cloquet a home opening-round game tonight against No. 7 seed Duluth Denfeld.

As the volleyball playoff season begins, the Pine Knot News takes a look at how our local schools were seeded and who their first round opponents will be, plus a look ahead at what might happen in the second round. All games will take place on Friday night unless otherwise noted.

In Section 7AAA, Cloquet completed its first 20-win season in years. The Lumberjacks' 20-6 record gave them the No. 2 seed in the section and earned Cloquet a home opening-round game against No. 7 seed Duluth Denfeld at 6 p.m. Friday, Oct. 29. The Lumberjacks defeated the Hunters 3-0 just a week ago and are hoping to continue their impressive season with a win and a chance to move on to a second-round meeting Wednesday, Nov. 3 against the winner of No. 3 Hermantown and No. 6 Hibbing. The 7AAA championship game is set for 1 p.m. Nov. 6 at Cloquet High School.

Section 7AA features eight teams with Proctor the No. 1 seed and Rush City the No. 2 seed. Esko gained the No. 3 seed with a record of 12-14.

The Eskomos were set to open at home against No. 6 seed Hinckley-Finlayson Wednesday. Moose Lake/Willow River finished its regular season with an 11-18 record and ended up the No. 7 seed, which puts the Rebels in an opening-round road game Wednesday at No. 2 seeded Rush City. The Tigers ended the regular season with a record of 16-4.

Winners on Wednesday will advance to the quarterfinal round on Friday, Oct. 29 at the high seed. Semifinals are set for 5:15 p.m. Wednesday, Nov. 3 at Hermantown for Esko or ML/WR if they advance. The championship game is Nov. 6.

South Ridge notched the No. 3 Subsection 1 seed and will host No. 6 Carlton Wednesday. The Panthers zipped to a record of 20-6 while the normally strong Carlton squad struggled to a record of 7-16 regular season.

The Cromwell-Wright Cardinals gained the No. 5 seed and traveled up to Grand Marais to take on Cook County in a 5 p.m. Wednesday game. The Cards wound up the regular season with a record of 11-12 and will face the 9-10 Vikings, a team that beat them 3-1 in mid-September.

Winners on Wednesday will play next at 7 p.m. Friday, Oct. 29 at the high seed.

Due to the large number of teams in Section 7A the section is divided into two subsections. The No. 1 seed in Subsection 2 is Ely, which ended up its regular season with a 19-6 record. One of those losses was a 2-0 tournament loss to Barnum which, as previously mentioned, is the Subsection 1 No. 1 seed. Once each subsection plays down to a single team, they will come together for a championship game to be played at 5:15 p.m. Wednesday, Nov. 3 in Hibbing.