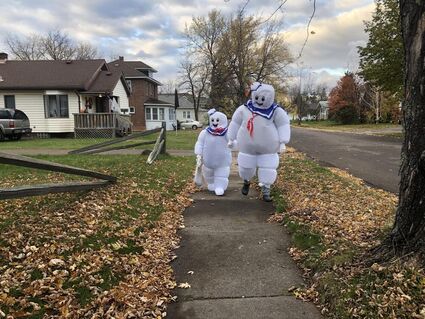 A parent and child took to the streets of Cloquet on Halloween dressed as the Stay-Puft Marshmallow Man from the film "Ghostbusters."

Halloween came to Carlton in a big way Sunday afternoon, with more than a thousand costumed children and adults heading downtown for the now annual trick-or-treat event.

Business owners dressed up as well, but were mostly too busy to visit as they gave away bags and bags of candy to the crowds that thronged the sidewalks for a solid two hours. 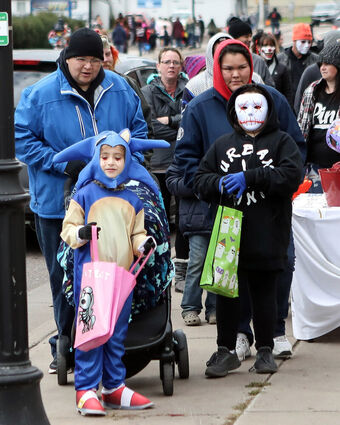 An estimated 1,300 trick-or-treaters, and their enablers, took to downtown Carlton on Sunday.

Grownups enjoyed their day of dressing up too. The entire McLain family came in costume as the Incredibles, Jenny Johnson came dressed as a package of Oscar Mayer wieners, pushing her dogs in a stroller of sorts, the pair of them dressed as ketchup and mustard. Cloquet's Jack McColley was a giant lumberjack, in flannel and carrying an ax, making the trek with Duluth's Curt Peterson (also in flannel) along with their spouses and young children.

It was a fun day in Carlton and across the county. A drive or walk down any street at dusk revealed moments that would be extraordinary on any other day: parent and child marshmallow characters walking hand in hand down the sidewalk, a teen dressed as Moses, another encased in black Spandex.

Mother Nature sputtered on Sunday afternoon - throwing rain, wind and snow for less than 20 minutes - but there would be no repeat of the 1991 Halloween blizzard on its 30th anniversary.