From here on out, it's an inside job 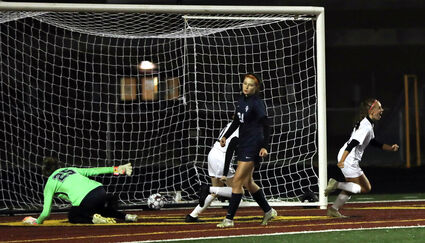 Cloquet's Katie Turner, far right, celebrates her goal in the first half last Wednesday in the first round of the state tournament against St. Francis at Irondale High School. It turned out to be the game winner as Cloquet advanced to this week's semifinal with a 1-0 win. The Lumberjacks were scheduled to face Benilde-St. Margaret's on Thursday afternoon.

The Lumberjacks were hoping for the No. 5 seed in the Minnesota Class AA state tournament, knowing they would have a rematch with St. Francis, which defeated Cloquet in the first match of the season. They got their wish, and ultimately defeated the Saints by a score of 1-0 last Wednesday night at Irondale High School.

"We knew this was a team that we could defeat heading into the state tournament," said head coach Dustin Randall. "They whooped up on us in the first game of the season. We deserved to lose that one, so it was awesome to get the win in the state tournament."

The Lumberjacks have now won 11 contests in a row, allowing only three goals in those 11 consecutive victories. Last week, Cloquet again focused on defense, applying pressure on the Saints and trying to capitalize when possible. They did a good job shutting down the Saints offense as the defenders for Cloquet-Carlton continued to play well, just like they have all season long.

"The group we have back there is amazing: they shut down the other team's top one or two players, which makes it hard for them to attack in our end," Randall said. "We knew they were going to have a hard time scoring goals. When Katie got that goal for us, I said to the girls, 'That could be the game winner.'"

Katie Turner scored what would be the game's only goal at the 15-minute mark of the first half after defender Caley Kruse raced up the sideline and crossed a perfect ball right to the penalty kick mark. Turner rocketed a shot past Saints goalie Emma Knack.

As the game advanced, Cloquet continued to frustrate the Saints by bottling up any rush they tried to move forward, and by tying up the Saints. If they did move forward, the 'Jacks were on the ball quickly and forcing it out of play.

The first half ended with the Lumberjacks controlling most of the play and taking a 1-0 lead into the break. The second half again was much like the first: Cloquet continued to frustrate St. Francis. They did have a few scoring chances but goalkeeper Katelyn Olson was able to thwart any possibilities for St. Francis.

Randall said the Lumberjacks are confident.

"The Soccer Hub had a big story about St. Francis coming into the state quarterfinals unbeaten. They had defenders who were forced to play as midfielders or forwards, but they expected a great tournament run, not even considering us and the possibility we could win," Randall said. "So often we tend to get overlooked by the metro area."

"We didn't just want to get to The Bank, we want to finish it all at The Bank. Hopefully we play like we have and I will honestly say I like our chances." Randall added. "The community, the fans, school, and just about everyone I run into has been so positive. It's been great, that's the good [thing] about having a split-up state tournament."

In the win over St. Francis, Cloquet's Katelyn Olson made seven saves, while Knack had nine.

Cloquet moved on to the state semifinals where they were set to face the top-seeded Benilde-St. Margaret's team at 12:30 p.m. Thursday at U.S. Bank Stadium. The second Class AA semifinal will follow that game, between No. 2 seed Holy Angels Academy and No. 3 Mahtomedi.

On Wednesday, Cloquet senior Katie Turner, co-captain with Kruse and Sadie Senich, said the players were excited to play at U.S. Bank Stadium. 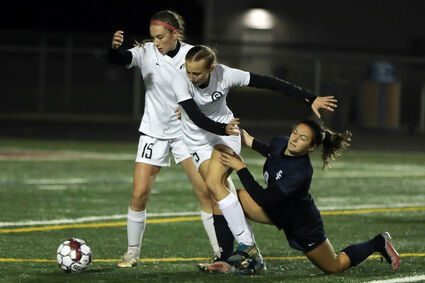 "It's something none of us have ever experienced and we know it will be an experience we never forget, no matter the score of the game," Turner said.

The winners of the state semifinals will play for the Class AA championship at 1 p.m. Saturday at the stadium. Losers of Thursday's semifinals will meet in the third-place games at 11 a.m. Friday at the West St. Paul Civic Center.