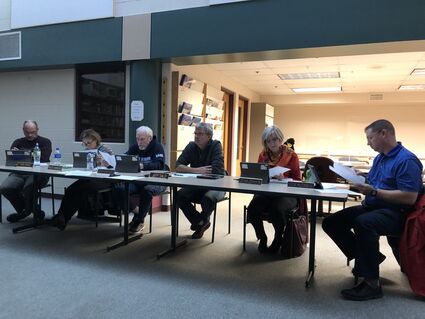 In front of a packed audience, Esko school board chairperson Jeff Salo started Monday's meeting with a lengthy apology but no details regarding an incident following a recent Eskomos football game.

Salo said he accepted responsibility for his actions and acknowledged that his handling of "the issue on the field" was wrong. He continued, explaining that while he was acting as an alumnus and former football player, and not a board member, it didn't excuse what he said at the Oct. 30 game.

"I'm disgusted with myself and the actions of that day," he said. "I would like to issue a public heartfelt apology to the student athlete, his family, the team ... I made a terrible mistake and I feel horrible about it." Board vice chair Jerry Frederick took over running the meeting after Salo's apology.

Details of the incident were sparse. Esko superintendent Aaron Fischer would say only that Salo approached an unnamed student athlete after the football game and was "overly critical and said some hurtful comments." A coach was there and he intervened, Fischer said, and the family and some other people reported it. "More than one person reported the incident to us," he said.

Because he is a subordinate to the board, Fischer said - upon advice of legal counsel - he turned the investigation of the incident over to the vice chair. Frederick also led the discussion on Salo's behavior and any consequences.

He started by outlining his process, noting that he talked to a lot of people and the facts of what happened aren't in dispute, nor is Salo's apology. He also spoke with legal counsel as well as Minnesota School Board Association representatives.

"What really happened was a violation of school board ethics," Frederick said, adding that the board members needed to discuss their thoughts on the matter at the public meeting. There was no recommended action; it was at the board's discretion.

Board member Todd Rengo read his statement first, noting that everyone in the district is expected to follow procedures but that people make mistakes. "As school board members, I think we have to be held to higher standards," he said. The culture of any organization, it's not what's written, it's the actions that reflect that and how we move forward."

Rengo suggested Salo step down as board chair; so did board members Maggie Sunnarborg, Jerry Frederick and Leona Johnson, each after making a statement.

"I've never seen Esko this angry," said Sunnarborg, a former teacher and athlete's mother, adding that she was willing to give Salo a second chance.

Frederick called it sad, but spoke about Salo's efforts on behalf of the students.

Johnson pointed out that she didn't want to interfere with what voters wanted, and pushed Salo to learn from what happened.

"This student is always going to remember what was said to him after winning a playoff game," McConnell said. "I, for one, thank the coach that stood up for the player. No one has the right to talk to any youth or anyone in that way, ever."

Salo responded, saying he was willing to step down as chair, but he would like to remain on the board. "I've worked hard over these past 13 years. Everybody makes mistakes. I made a big mistake. I've admitted it. I've tried to make up for it."

Frederick said the board really could not remove a board member who was elected by the community. "Legally, that's what we can and can't do."

Salo officially resigned from his chair position. Frederick will be acting chair until the Nov. 22 board meeting when the board will elect a new chair and fill any other vacancies until the January organizational meeting.

About 35 people attended Monday's Esko board meeting. Nearly half of those in attendance were Esko teachers and staff members. Members of the Esko Teachers Union had submitted a letter prior to the board members regarding parent-teacher conferences and worries about safety, because masks are not required after 3:30 p.m. in the schools.

"We would like the school board to consider allowing teachers to have the choice to conduct all-virtual conferences or require masks for in-person conferences in the elementary school setting, and per teacher request during the high school conferences," the letter stated.

Board members declined to alter the masking requirements, citing a lack of time to communicate changes to parents and not wanting to change afterschool masking rules.