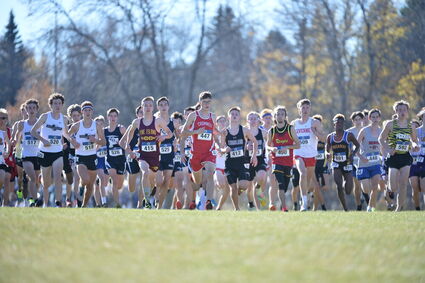 Cromwell-Wright junior Noah Foster, center, ran to fourth place in the Class A state cross country meet Saturday in Northfield. It was the top finish for any Carlton County runner.

Carlton County sent more than 35 runners to the cross country state championships Saturday, and they came back with some impressive results.

Most impressive of all was Cromwell-Wright junior Noah Foster, who placed fourth in the boys Class A meet at St. Olaf College in Northfield. Foster ran the 5,000-meter race in 16:26.03. It was a big jump from his finish in 117th place as a freshman, although not quite the first-place spot he was gunning for.

Less than a second separated Foster and the second- and third-place winners, who finished in 16:25.02 and 16:25.93. Individual champion Jakob McCleary, a senior from Perham, was the clear winner, roughly 16 seconds ahead of all of them. But he will graduate this year and Foster won't, which will give the Cardinals top runner another crack at his state goal.

Cromwell coach Pete Koenig thinks that's possible, because he knows what kind of work ethic it takes to be successful at cross country, and Foster has it.

"Cromwell has some great sports programs and coaches, but in cross country, it's the kids. It's not a team. It's all on them and they have to work hard," he said, pointing to the roughly 300 miles Foster put in over the summer. "When they work hard, good things happen."

The next-best Carlton County runner in the Class A meet was Esko senior Nathaniel Rengo, who took 33rd place in 17:19.11.

The Esko boys qualified as a team for state, and finished in 14th place with 231 points, one point behind the 13th-place team and two points behind the 12th-place team. Other Esko finishers included junior Benjamin Meysembourg in 59th place, senior Michael Cornell in 78th, senior Jack McWilliams in 85th, freshman Alec Halvorson in 141st and senior Zach Erkkila in 155th place.

Esko coach Jerimy Hallsten was very happy. "Everyone ran a great race and put forth the tremendous effort that they have all year," he said.

Panthers freshman Alex Burckhardt placed in 75th, ahead of half the field of 159 runners as a freshman, Panthers coach Jeremy Polson pointed out.

Polson was thrilled with his South Ridge girls team, which finished second to the Carlton/Wrenshall girls team at sections to qualify for state, then beat the Raptors at the Class A girls meet Saturday. South Ridge finished with 287 points for 12th place at state, while the Raptors finished in 14th with 302 points.

Panthers Addison Burckhardt - a North Woods freshman who runs on the collaborative team and who finished first at sections - was the top local girls finisher, in 42nd place and a time of 20:28.73. Her teammate, sophomore Evelyn Brodeen, finished two spots behind her in 44th place at 20:29.05.

Polson said it was their best team finish ever.

"[It was a] great experience and team effort," he said. "We return most of the team and have strong up and coming runners."

Raptors coach Erik Holter said the combined team prepared for the postseason "knowing that their races were about bigger things than themselves."

"They ran for the glory of God and also for people that are special to them that have passed away or people close to them who were not healthy. Let alone their mental preparedness, their work ethic at practice shined," he said after the section meet. "They showed up each day ready to work and do exactly what the coaches had prepared for them. They certainly have peaked at the right moment."

Hallsten expects a strong performance from his team next year too. "[They] set the bar for next year's team," he said, rattling off a list of returning runners.

Following the Section 7AA meet in Cloquet on Oct. 28, the consensus from the second-place Cloquet boys team was that the temperature - a gray day with temperatures in the 40s - was ideal for running.

That wasn't the case for the northern boys at the state meet in Northfield Saturday. By the time the Class AA boys race started, the temperature was almost 70 degrees with direct sun.

"Overall they ran well. No PRs (personal records) with the warm temperatures, but they had a nice race," said assistant Cloquet coach Ryan Zimny. "But the heat definitely was a factor."

Only one girl qualified for state on the girls' side, Elise Sertich, who finished in 21:02.14, good enough for 84th place as a sophomore.

As a team, the Cloquet boys took 11th place out of 16 teams with 281 points; the top five runners make up the score. Zimny said that's the highest finish they've had in the past several years as a team at state.

The boys finished in the field of 160 runners as follows: 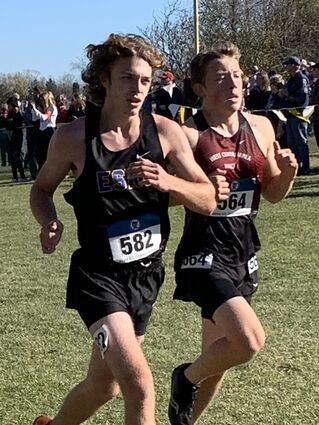 Mertz passed Fischer in the later stages of the race, crossing the finish line almost seven seconds ahead of his teammate and closest competitor, at 17:12.21 to Fischer's time of 17:19.13. Senior Sam Buytaert also had a strong race, finishing in 17:42.68.

The state experience is a little less stressful, Zimny said.

"It's always nice to finish off the season with a trip to the state meet," he said. "It's a celebration of the hard work they put in without the stress of sections where they are trying to qualify for state, so it is a bit of a more relaxed atmosphere for them, even though they are still trying to run their best."