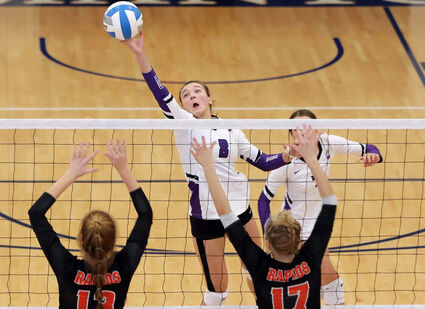 Cloquet's Aili Buytaert stretches to get to a ball during Saturday's Section 7AAA championship volleyball match with Grand Rapids.

Cloquet volleyball had a busy week in pursuit of its first ever trip to the state tournament.

The final week began with a semifinal victory over Hermantown last Wednesday, Nov. 3. The Lumberjacks beat Hermantown 3-1 to advance to the section finals. Senior Breea Rasmussen led the way with a career-high 15 kills and 14 digs. Sophomore sensation Ava Carlson continued her successful season with 16 kills and 18 digs. Senior middle hitter Geneveve Fonoti had nine kills and four blocks, junior Aili Buytaert had 11 kills, and sophomore Carly Johnson was running the show with 43 set assists. Sophomore Quinn Danielson was the defensive stopper with 24 digs.

Coach Heidi Anderson was pleased with how her 'Jacks were able to dispose of the Hawks.

"We had a nice balanced attack. We start four sophomores and people forget that we had no playoffs last year," she said. "So many of these girls are experiencing their first ever playoff run. And with Hermantown being in the Lake Superior Conference with us and a rival, the girls were looking forward to playing them."

In the history of Cloquet volleyball, the team has played in the section finals only three times, the last time in 2013. Cloquet earned the second seed and was facing top-seeded Grand Rapids. The two teams last met Oct. 14, with Rapids winning convincingly. But coach Anderson pointed out that one day before that match, starting setter and senior Emerson Rock suffered a back injury and wasn't available. The 'Jacks were struggling with a new setter and lineup.

Fast forward three weeks, and Cloquet has established a new setter with Carly Johnson running the show and Rock coming off the bench to provide some senior leadership.

Rock said it was tough not being able to play the last games of the season, but she learned she could still make an impact. "I was able to mentor the younger players even more during this time, giving them advice and tips on how to succeed," Rock said.

Before the game, Anderson listed three requirements to beat Rapids. "They surprised us last time by serving short. So we have been practicing all week for that. And we need to do a better job on first contact. And we need to transition better from defense to offense."

Anderson, head coach for 18 seasons now, gave a scouting report of the Thunderhawks before the game. "They have a few more hitters than what we faced in the semis. They run some quick middle attacks and they have a tall, left-handed setter that likes to hit the ball over on two." The advice that Anderson gave her team was, "Do your best, compete and enjoy the experience of being in the finals. They are hard to make, and it has been eight years since we were in the last one."

Minutes before the match, Grand Rapids coach Bekah Sutherland shared what her team needed to do to advance to St. Paul.

"We need to serve successfully. By that, I mean we need to serve our zones and serve the players we have targeted." Sutherland continued, "We blocked well against them the first time we saw them and served well to keep them out of system. We need to be mentally ready." Rapids also has a young squad with only one senior starter.

The table was set. Now it was time for the big game. Cloquet was attempting to earn its first ever trip to State. Nerves seemed to be in play as the 22-6 'Jacks couldn't stop the booming hits from an array of Grand Rapids attackers. Carlson and Fonoti tried to keep Cloquet on pace, but Cloquet lost the first game 25-12. Kyra Giffen, Kamryn Klinefelter and Katelyn Jamtgaard combined for 11 kills.

Game 2 started out with Cloquet having a few good plays followed by unforced errors of serving long or hitting out of bounds. Every time the 'Jacks tried to make a run, Rapids seemed to come up with the ace kill or block. Especially effective was the Rapids setter Braya LaPlant with her array of shoot sets to the outside, quick middle attacks or setting her back row hitters, mainly senior outside hitter Klinefelter. Grand Rapids took game two, 25-15.

Cloquet seemed to settle down in the third set as Rasmussen, Buytaert, Foneti and Carlson all had big kills. The two teams traded points down the stretch but a few missed timing plays between setter and hitter came at the wrong time, and Rapids finished the sweep with a 25-21 score.

The Lumberjacks were led by Carlson with nine kills while Rasmussen, Fonoti and Buytaert all chipped in with six each. Johnson had 22 set assists.

"They are tough," said Anderson after the match. "Several kids can score for them. They have a lot of weapons. I am pleased with my team's effort. They put everything they had on the court. They had a good season."

Rapids was led by Klinefelter, who had a team-high 13 kills, with Jamtgaard and Giffen both finishing with nine kills apiece.

After the match, LaPlant, a 5'11" setter for Rapids who also contributed six kills, said it was "amazing" to be headed to state. "A lot of us have been playing together since third grade," she said. "We played so hard today because we didn't want to waste it."

Grand Rapids is now 21-9 and ranked seventh out of 61 in AAA. They are seeded fifth at the Class AAA state tournament. Making first-team All Conference is LaPlant and junior libero Lindsey Racine. Kyra Giffen made the second team. LaPlant later learned she made the All State team, which consists of the top 18 players in the state at each division.

Cloquet fell to 22-7 and ranked 14th out of 61, one of their highest finishes ever. Ava Carlson was also selected to the All State team. Rock earned first-team Lake Superior Conference honors with Carlson and Buytaert earning second-team honors. 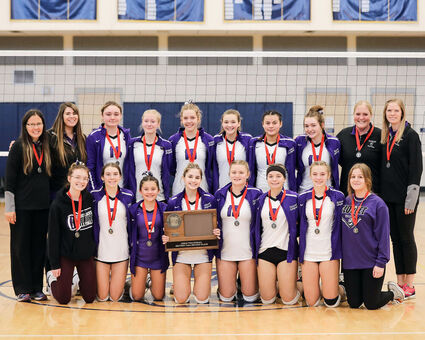 "As captain, I am so proud of the success our team had this season," Rock told the Pine Knot this week. "We did a good job of taking it one game at a time and not getting ahead of ourselves. We focused on how we needed to play as a team to take down each opponent as we faced them."

As for the season totals, Carlson led Cloquet with 330 kills. Buytaert was second with 195 and Rasmussen had 149.

Johnson had 59 ace serves with Carlson next at 55.

"It is hard to think about my high school volleyball career wrapping up, as this sport and my coach, Heidi Anderson, have been such a big part of my life and have made such a positive impact," Rock said.