Girls get fourth at state tourney 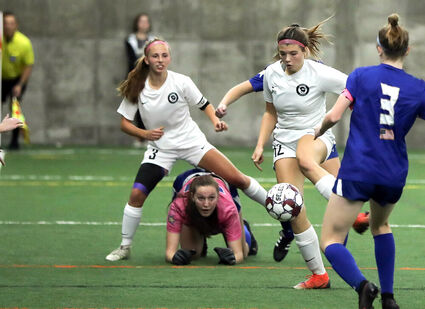 Alexa Snesrud (12) gets to a rebound off teammate Katie Turner's shot to score a goal in Friday morning's Class AA third-place soccer match with Holy Angels in West St. Paul. The 'Jacks settled for fourth place.

The Lumberjacks took to the big stage at U.S. Bank Stadium Thursday afternoon in a semifinal game against top-seeded Benilde-St. Margaret's. It was the Red Knights who defeated Cloquet-Carlton 3-0 and advanced into the state finals, while Cloquet faced Holy Angels in Friday's third-place contest, a 6-1 loss.

Sadie Senich said the team had waited for this trip to state for a long time, because last year's state competition was canceled because of the pandemic.

"For most of us, as soon as we left [the section championship game], we were already thinking of what we could do with the team this year," Senich said. "Then to be able to advance past the first round was a dream for us." 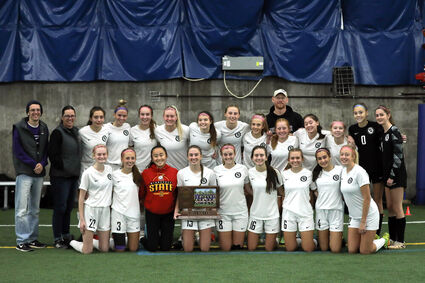 The Lumberjacks girls soccer team posed with the fourth-place trophy after making a run at the state soccer tournament last week.

In the semifinals, the Red Knights played outstanding defense and worked the ball meticulously on offense. Although they controlled action early on, it wasn't until the 25-minute mark when Elizabeth Deitzen beat Cloquet goalkeeper Kaitlyn Olson off a corner kick to give the Red Knights a 1-0 lead.

The Red Knights made it 2-0 at 33-minutes, when Kiya Gilliand took advantage of a pass from Ava Wagener and beat Olson over her right shoulder. The Lumberjacks had a tough time breaking past the defense, managing only two first-half shots on goal compared to four for the Red Knights.

"We knew that both teams we played were good, very good," coach Dustin Randall said. "They were fast, played good defense and moved so well with and without the ball."

Although the 'Jacks hoped to cut the lead in the second half, Benilde-St. Margaret's continued to control play and took a 3-0 lead at the 69-minute mark as Gilliand scored her second goal of the game to ensure the victory.