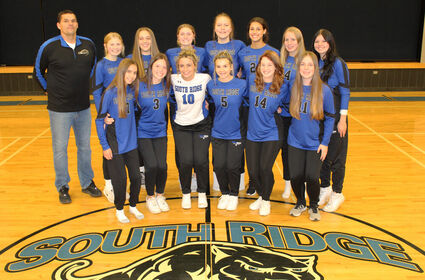 South Ridge earned its first ever state volleyball appearance Saturday by defeating Northeast Range 3-1 in front of a large crowd at the Lincoln Elementary School in Hibbing. After coming from behind Wednesday against Ely, the Panthers used that momentum to advance to the state girls state volleyball tournament this week at the Xcel Energy Center in St. Paul.

The Panthers came out a little slow Saturday, falling behind 9-2 to the Nighthawks in the very first set, but a timeout by head coach Brad Olesiak got the team refocused. The Panthers went on a 22-13 run to defeat Northeast Range 25-22 in the first set.

"I knew the girls were excited and ready to go Saturday," Olesiak said. "So when we fell behind early, I just told the girls to slow down and focus and we will be fine." Following the timeout, the Panthers controlled the tempo and the win gave them the confidence that they could do it.

The second set again saw the Panthers continue to play fast, pass the ball well and press the Nighthawks into several unforced errors which resulted in a 25-14 victory in the second set.

"We knew what our game plan was, where we wanted to serve the ball and to keep their best player on the defensive rather than offensive," Olesiak said.

Keeping Hannah Reichensperger from dictating the action for the Nighthawks worked so well that the Division I commit to Illinois State finished with only 17 kills on the night, far below her average of 31 per contest.

In the third set, South Ridge jumped out to an early 8-2 lead. In a reverse of the first game, following a tim out by Northeast Range, the Nighthawks battled back to pick up a win in the third set 25-21.

"I knew what their coach told them," Olesiak said, "I'm sure she reminded her team what we did coming from behind two sets to none to Ely and that they can do the same thing, especially after they beat us earlier in the regular season. They knew us very well, but our team responded in the fourth set. Even though it was a close battle [with] 11 lead changes, I just felt we were going to win, and we did."

Kelly Bergum and Svea Snickers led the Panthers with 12 and 11 kills while Bella Schneider had 30 set assists and Adella Olesiak finished with 30 digs for South Ridge.

The win moved the Panthers to 21-6 on the season. They were set to face Class A top-ranked team Mayer Lutheran Thursday afternoon in St. Paul.

"I saw film on this team," coach Olesiak said. "They look like a college team, and they have two Division I commits for next year.

"We will just go down, play our style and try to use our speed and quickness and we see what can happen."