'Beauty' of a story plays in Cloquet 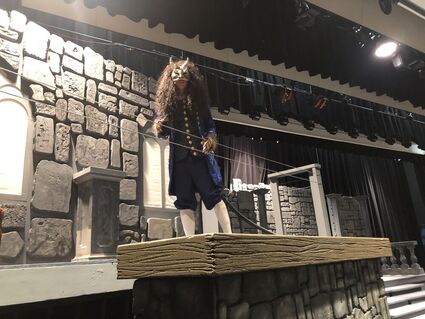 Sam Buytaert is the Beast, a once arrogant prince who was transformed into the beast by an enchantress, and only love can set him free.

The Cloquet High School fall musical has returned, and it is a spectacle. In the Disney version of "Beauty and the Beast," wondrous human teapots, clocks, dressers, candlesticks and more come to life on the stage, dazzling audience members and startling the "only human" characters in the show.

The set is also remarkable: creator and handyman Rich Brummer has outdone himself, hanging three massive antlered creatures (that he shot out West) on a Tudor-style tavern wall, and crafting a castle worthy of the Beast himself.

There's plenty of talent to go around too. So much, in fact, that two girls are playing the part of Belle: Olivia Macaulay on Thursday and Saturday, and Martha Stephenson on Friday and Sunday. LeFou is also being played by two actors: Sarah Ellet Cardinal and Sam Remus. The Beast is played by senior Sam Buytaert, comfortable on the stage he first trod as Oliver when he was a fourth-grader at Washington Elementary School. Ilei Benson as Cogsworth and Jack Liang as Lumière are also magical.

"Beauty and the Beast" is a musical for all ages, with lessons to be learned and fun to be had. For the few who haven't seen it: the story is of an arrogant young prince and his servants, who have fallen under the spell of a wicked enchantress. She turned the prince into a hideous Beast, and the spell can be broken only when he learns to love and be loved in return. When the headstrong and no-nonsense village girl Belle enters the Beast's castle after he imprisons her father, the servants see hope that the spell could be broken. With their help, Belle begins to draw the coldhearted Beast out of his isolation and even teaches him some manners, as the two begin to fall in love.

Longtime CHS theater set guru Iris Keller directs the musical, after playing a supporting role to six directors over the past 15 years.

"It is way harder than I thought it was," she said about directing. "Also because I love backstage, I love that artistic outlet."

But she's thrilled with the end product, albeit exhausted. It's exactly what the doctor ordered.

"The reason I picked this play is because it's such a big bright happy musical," she said. "After the year of Covid, I thought we really needed to get the kids back on stage and do something fun and big and very Cloquet. Cloquet always does stuff big. We pride ourselves on that. We really do try to raise the bar, and we have so many talented kids."

A handful of outsiders - formerly insiders - sat in the audience Friday, there to give feedback to the cast.

Former CHS director Kevin Hamre balanced criticism with praise, encouraging cast members with non-speaking roles to dive into their characters during busy populated scenes such as the tavern scene that celebrates the ego of one man, Gaston, who is determined to make our heroine, Belle, his bride.

"Gaston, where did you come from," said Hamre, with full approval of Carter Haroldson's performance Friday.

"Alaska," the cast members answered in unison, as if they'd rehearsed it (which they didn't). It was true: Haroldson moved here from Alaska last year, right at the start of Covid. This will be his first and last CHS musical, because last year's show was canceled due to the pandemic.

"I've been in a lot of plays but this is my first one here," he said before practice Monday. "It's been fun."

Keller and her team - Karen Fox on costumes, Katy Buytaert on music and Darrell Davey as assistant director - gathered after Friday's rehearsal to debrief.

The conversation between "the broad squad and double D" reveals that putting on an elaborate musical in the finest tradition of CHS was made even more challenging by two things: the pandemic and athletic success.

Various sports teams went to state and section championships and with them went some of the show's leading actors, including the Beast and one of the two Belles. At the same time, having so many things canceled last year and spending lots of time at home may have affected students' ability to juggle all their different activities.

Keller said it was impossible to schedule rehearsals.

"Even this last Tuesday night they had a game, all-star soccer. I can't get them all on the stage so we've been doing bits and pieces. That's what we're doing now, putting all those bits and pieces into one fluid thing."

That was Friday. Happily, the kids pulled it together over the next four rehearsals, and Katy Buytaert reported that Wednesday's free performance was fabulous.

It was time to focus on the show and they did, pulling it together at the last minute the same way so many casts have done before.

They are a family, Keller said. 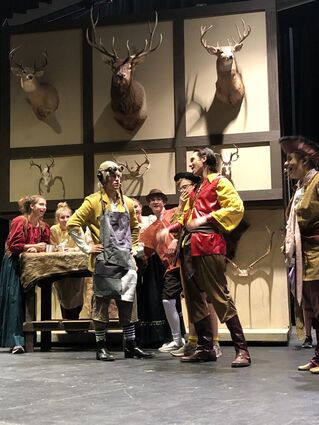 "This is one of those rare activities in high school where all the different groups of kids - the jocks and the nerds and the misfits - and they just become this one cohesive unit," she said. "It's boys and girls, all the grades, and they become this theater family."

Davey agrees, noting how kids who might not normally hang out find each other at the theater and start talking. They tend to embrace newcomers like Haroldson.

"I think one of the silver linings after the pandemic is the connections the kids are making and rekindling again because, boy, did they miss out," Katy Buytaert said.

And that's the beauty of it too.

"Beauty and the Beast" runs Thursday, Nov. 18 through Sunday, Nov. 21. Performances start at 7 p.m. the first three shows, and 2 p.m. on Sunday. Tickets are already in short supply; find them on the district website at isd94.org at the link below the poster. If any seats are open, they will be available at the door as well.