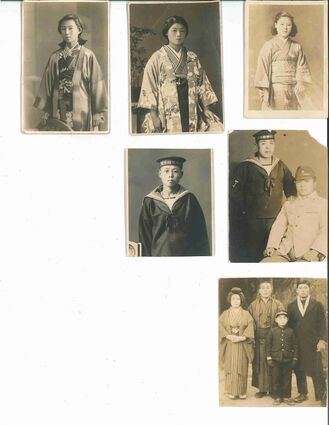 These photographs are part of a collection long held by World War II veteran Wiekko Seppo, a Marine from Duluth who fought in the Pacific Theater in 1944 and 1945, including the one of the deadliest battles of the war on Iwo Jima. Seppo's widow, Susanne, has turned the photos over to Cloquet librarian Keiko Satomi in hopes of getting the photos to family members in Japan.

The sepia-toned photographs, slightly larger than a business card, tumble out of a browning, mottled envelope. For what is known of the six photos, and also what is enticingly unknown, the sight of them is breathtaking.

From what can be pieced together across nearly eight decades, the photographs were found on the bodies of dead Japanese soldiers during a Pacific Theater battle in World War II. There are pictures of three women in formal dress. Sisters? A mother? A girlfriend? There is a family photo. Two pictures of soldiers. There is some identifying writing on the back of them, in columns of scribbled Japanese forms.

Keiko Satomi has been charged with finding more about the photos, and to perhaps get them back to families in Japan.

"It's such history," she said from a table in the children's section of the Cloquet Public Library where she works. "These were passed hand to hand with so much emotion. You think of how much they meant" to the soldiers.

We know the hands from which the photos passed since the end of the war in 1945. It was a Finlander from Duluth, to a German-born wife in Cloquet and, now, to a librarian, born in Japan.

Weikko Seppo was too short. Five feet and 4 inches tall, he somehow got accepted for the Marine Corps after being drafted into the Army. He left Duluth and trained in California as part of the then novel amphibious Marine divisions created to bolster the U.S. presence in the Pacific.

They were trained for beach landings and fighting the enemy on established enemy turf on remote islands needed for aircraft staging.

Seppo fought on Tinian in August of 1944 and Iwo Jima in February and March of 1945, among others. In those two battles, he was injured, and received a Purple Heart medal and Gold Star.

Seppo died in 2001 at age 77. What is known about the photographs comes from his wife of 26 years, Susanne Stiefel Seppo.

Susanne is among thousands of people across the country who have found themselves clearing things from their homes during the pandemic. The photographs have been on her mind for some time, especially since meeting Keiko Satomi as a frequent Cloquet library user. Satomi was born in Japan, and maybe she could find something out about the photographs.

Born in Germany and raised in Duluth, Susanne was a generation younger than Weikko. They married in the mid-1970s. He told tales of the war, and certainly had nightmares, but she never could piece it all together. She said he suffered from Alzheimer's disease in his 50s, likely the result of his war injuries. Before he died, he had been in a care facility for some time.

"I didn't want to do anything (with Weikko's war relics) while he was living," Susanne said. "The pictures have been in a box for years. I thought it was time to find them a home, and I thought of Keiko."

Keiko Satomi is using family and friends in Japan to try to piece together information on the six photographs. She put the images on Facebook and asked for help in deciphering the writing. She saw that one picture showed a military member wearing a hat saying "Sasebo Navy" on it. Sasebo was a large seaport in western Japan in the Nagasaki Prefecture. It was an important base for the Japanese and was on a list of 17 sites designated by the U.S. for an atomic bomb drop.

Satomi heard back from people at City Hall in Sasebo. They identified the name and address of the man in the photo and confirmed that he was a casualty. They are looking for any possible family members.

Satomi also contacted the Obon Society in Oregon, which helps Americans in returning war relics to Japan. Its director said she would take on the photograph project. Most commonly, Obon deals with the "good luck" flags the Japanese wore before going off to service. They are deeply personal objects, signed by family and friends with messages. They became common bounty for American soldiers.

Dick Jessor was the same age as Weiko Seppo when he fought in a neighboring division of the Marines at Iwo Jima. He was planning on celebrating his 97th birthday on Wednesday. The Pine Knot News came across his name on a search for Iwo Jima veterans because he was in the news the past year, retiring from the University of Colorado Boulder as the longest-serving professor in the school's history: 70 years. He taught behavioral sciences and psychology.

Jessor said it was unusual for photographs to be taken from enemy soldiers. He recalled coming across a body outside his foxhole one morning and looking for one of those flags. He ended up finding letters on the soldier. The inhumanity of war hit home as he saw a commonality with his enemy.

"I didn't touch those," he said of the letters. "It was an epiphany. I had letters from home in my pocket. It really gave a whole sense of how crazy it was."

He said the fighting on Iwo Jima was so fierce, with the enemy hidden in bunkers underground, that it drove men to extremes when it came to how they reacted when coming across a Japanese body. Unspeakable things, Jessor said. "The anger and hostility just came out after being continually shot at by people you couldn't see. Being assaulted by an unseen enemy."

There were an estimated 20,000 Japanese on Iwo Jima when the Marines landed in February of 1945. Most of them died there. More than 7,000 U.S. soldiers died as well.

Jessor eventually did handle one of those Japanese flags. He has a hand grenade from the island sitting on his desk at home.

He said he couldn't say what may have been in Weikko Seppo's mind when he obtained the photographs. It remains a question if he got them from Iwo Jima or someplace else. "You do get a sense of how much the enemy is just like you," Jessor said. "Pawns in a battle. The sense throughout became an abstraction."

Seppo was a sharpshooter and "he killed a lot of Japanese," Susanne said. Perhaps he found in the photographs a moment to reflect.

Satomi has studied the writing on the photographs and believes some of them may have been collected by a Japanese soldier before coming to Seppo. Some have two sets of handwriting on them, the original information a soldier may have written on them and then a different hand perhaps noting when the pictures were obtained from a dead soldier.

It could be that Seppo got the photos from one man who had been collecting the momentos in hopes of surviving and returning them to families.

"I hope I can find them a home," Satomi said.

She had a grandfather from Japan who survived the war after being captured by Russians and spending four years in Siberia.

Susanne Seppo said she's glad she has Satomi working on the mystery of the photographs. It really is a twist of fates: a native German finding a native of Japan to work out a Pacific island mystery sparked by a Finn nearly 80 years ago.

Susanne will take it. "What are my choices? Throw them out?"

If they find a home with family members in Japan, that will be more than she could imagine, she said. "It will have some meaning to them."

If you have war relics from Japan 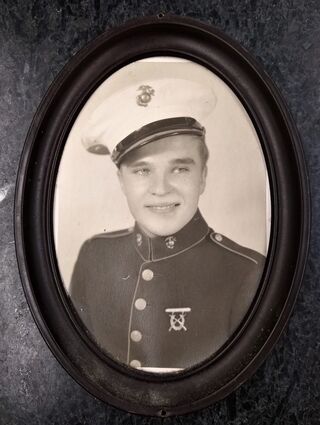 OBON SOCIETY, headquartered in Astoria, Oregon, is an international humanitarian organization that manages the largest and most experienced independent network in the world for returning personal heirlooms to families in Japan. With more than a decade of experience, their team of archivists, researchers and scholars receive, search and return personal items that were taken from the battlefields of WWII.

If you are in possession of personal item from WWII you want returned to the brothers, sisters, sons and daughters of missing Japanese soldiers, please do not hesitate to contact OBON SOCIETY.

The website has complete details at obonsociety.org or you visit their channel on YouTube to see interviews with veterans and their families by searching OBON SOCIETY.