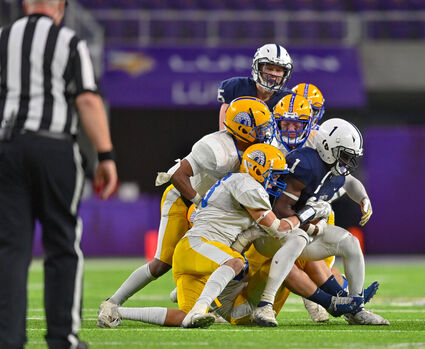 The Eskomos' hopes of moving into the state Class AAA championship next week dwindled away down the stretch of the fourth quarter at U.S. Bank Stadium Saturday afternoon. That's when Dassel-Cokato came from behind and defeated Esko 21-14 in the State Class AAA semifinals.

Esko knew they would need to come out ready to play against the top-ranked team, and that is exactly what happened as the Eskomos exchanged punches with the Chargers and never backed down. They earned a lot of respect from fans, media and others.

The game started out as a back-and-forth defensive battle with both teams trying to establish what they wanted to do offensively, but both defenses came up big, stopping each other.

"Our coaches did a great job coming up with a defensive game plan against the run-heavy team and it worked almost all game long, with the exception of three- to four plays," said Esko head coach Scott Arntson.

The Eskomos had a big task in trying to control the Chargers' top running back Eli Gillman, who entered the semifinals with a game average of 188 yards per game. Esko did just that for the first three-and-a-half quarters - they contained the senior running back. By the end of the first half, Gillman had only 19 yards on the ground, but he did score the first half's only touchdown on a 3-yard touchdown with 4:22 remaining in the second quarter.

Esko tried to mount a late drive in the second quarter but a fourth down and 6 situation failed, as Ty Christensen could not connect with Makoi Perich.

The Eskomos trailed 7-0 at the break in a very tight defensive battle which saw both teams muster only 120 yards between them in the half.

With Esko down 7-0 as the third quarter began, there was a feeling of something familiar. Last week Esko trailed New London-Spicer 7-0 at the break, came back and won the quarterfinal matchup, so Esko was once again hoping for the same kind of outcome.

As they did a week ago, the Eskomos took the opening drive of the third quarter and marched down the field in an 11-play 73-yard drive. After Christensen connected with Carter Zezulka on an 11-yard touchdown pass and a Wyatt Stankeiwicz extra point, the contest was tied at 7-7.

The very next series, it was Dassel-Cokato, with momentum in the Eskomos' favor, that tried a fourth-and-1 handoff to Gillman. The star running back was stuffed at the line by Daniel Demuth, and Esko took over on downs deep in the Chargers' end.

After the huge stop by the Eskomos, three straight Nolan Witt rushes picked up 33 yards and a first down and goal at the 2-yard line, but an Eskomos fumble recovered by the Chargers ended the drive.

The Chargers failed to move the ball on the possession following the Eskomos fumble and were forced to punt, which put Esko in great field position for the next drive. Esko started on its own 46-yard line and quickly moved the ball down the field. As the third quarter moved into the fourth, Witt scored the Eskomos' second touchdown on a 2-yard touchdown run to take a 14-7 lead.

Eli Gillman, who was held to only 8 yards in the first three quarters, had one carry on the next drive and it was a big one, scoring on a 44-yard touchdown run to tie the game at 14-14 with 9:42 left in the fourth quarter.

Esko's next drive saw a third down penalty cost them an opportunity, and they were forced to punt the ball away with a little over eight minutes remaining in the game. 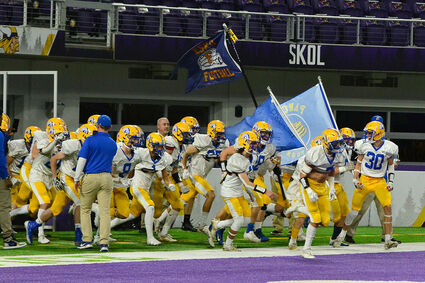 Esko takes the field for the state semifinal game at U.S. Bank Stadium in Minneapolis. The Eskomos outgained Dassel-Cokato in offensive yardage but simply ran out of time to match a late touchdown by the Chargers.

With the game tied, it was the Chargers who put together a long sustained drive that lasted almost 7 minutes and was capped off with Gillman's third touchdown of the game, this time a 1-yard run which put the Chargers in front for good, 21-14.

Esko made a final attempt to put together a late drive, but the hopes of the comeback faded when the Chargers' Jake Hillman intercepted a first down and 10 attempt following a big fourth and 10 completion by the Eskomos.

"I have never been so proud of a group of kids," Arntson said. "They fought hard, worked hard and deserved to be here."

The Esko season came to an end Saturday with an overall record of 11-1 on the season.

"We have a very young group," Arntson said. "We came into the season not knowing what to expect, but these kids believed, and they made believers out of many of us."