After two decades in top job, Cloquet coach steps down 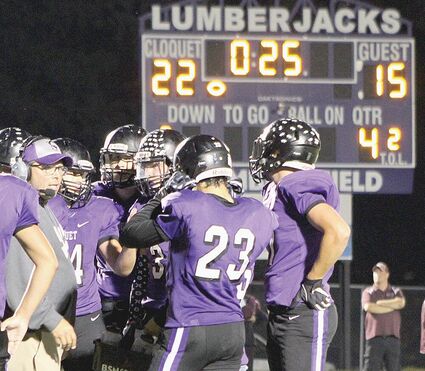 After 19 seasons, Tom Lenarz has resigned as head coach of the Cloquet Lumberjacks football team. Lenarz notified activities director Paul Riess on Monday, and prior to that had sent out a letter to players, who received them just after Thanksgiving.

"I've been talking to my wife, Collette, about this for a while now," Lenarz said on Monday. "I wanted to be sure. I talked to a lot of people I trust, including my old high school football coach at Blaine."

Lenarz played linebacker for Blaine and graduated in 1989. He went on to play for four seasons at Bethel College before coming to Cloquet to start a teaching career in the fall of 1993.

"A year after starting in Cloquet, I became a middle school coach and then spent nine years as an assistant in the program," Lenarz said. "I think once I moved up through the ranks I started to think being a head high school coach is something I really wanted to try."

Things did not start smoothly for Lenarz, who was winless his first two seasons before finally winning a single game in the third. In his first three years as a coach he was 1-26.

"I will never forget that first win," Lenarz said. "It was at home against Hibbing and the fans stormed the field like we had just won the Super Bowl."

Lenarz was looking at the big picture. He developed a youth tackle football program and used that as a feeder program to develop more players. Eventually that work paid off with a series of state football appearances including a runner-up finish in the state Class AAAA tournament in 2017.

"That certainly was one of the highlights of my career," Lenarz said. "It was just the culmination of such hard work by so many people. I've been lucky in that I have had so many coaches with me for a long time and they provided a lot of stability in the program. I let them do what they do well and got out of their way."

Jeff Ojanen has been with Lenarz the longest, and former offensive coordinator Paul Riess coached with Lenarz from the beginning until last season. Other longtime coaches include Taylor Kolb, Ryan Lindstrom, Lance Horvath and Tim Prosen, who has been the middle school coordinator for football for the past 16 seasons.

In 2013, Cloquet made its first trip to the state tournament under Lenarz. As he watched the final seconds tick off the clock, he had a flashback to his first few years in the program.

"I thought how fortunate I was that the administration stuck with me through the tough times," Lenarz said. "We knew what we wanted to build, we knew what we had to do, but we knew it would take time. It would have been so easy for the administration to go in another direction, but they let a young coach learn on the job, and that was appreciated. I hope more young coaches are that lucky."

His low-key approach to resigning his position is typical of the way Lenarz deals with parents, coaches, players and community members.

"I would hope that if people think I have one strength, it is my ability to foster relationships," he said. "I think the kids, the parents and coaches all know I genuinely care about all of them, and that goes a long way in relationship building."

That relationship building has the program in a good place with strong numbers and the potential of another good football team next fall.

"Part of what made my decision easier was the fact that I don't think the team will miss a beat because the program is in a good situation with numbers to be competitive," Lenarz said. "My only advice to coaches is you really want to make sure every single player feels like they are a part of the program. That means sometimes it is more important to spend time talking with the kid who isn't getting as much playing time and making sure how important he is to the whole team."

After becoming athletic director in 2004, Lenarz became the middle school assistant principal, so he will still have a hand in developing the youth in our community.

"I will still be going to games and watching, but it will be fun to go and just be a fan," he said. "I haven't had a fall free since I was in fifth grade, so I am not sure what will happen."

His wife, Collette, who has been a big part of success, chimed in with a story about the early days.

"Let's just say I bought him a bottle he could open to toast his first win," she said. "Little did we know it would take almost three years before he could open the bottle."

Lenarz laughed at the story and also talked about what the future might hold. Collette said she has a long list of things for him to take care of at home.

"I guess you have to watch what you wish for," the now former coach said. "Like I said, I am not sure of how this will be, but I certainly am looking forward to having more time on my hands instead of all the time that is involved with being a head high school coach."