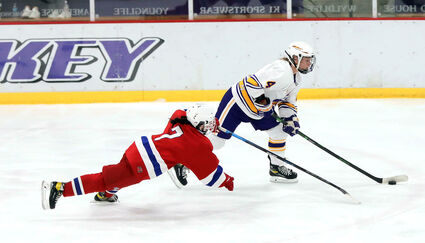 Cloquet-Esko-Carlton's Dana Jones gets by Moose Lake Area's Jorja Jusczak for a shot on goal during the Nov. 23 game at Northwoods Arena in Cloquet. The Lumberjacks held on for a 2-1 win.

After the first three games of the girls hockey season, the Moose Lake Area team was 3-0 and Cloquet-Esko-Carlton was 1-2. On Nov. 23, the two teams met, with the Lumberjacks coming out on top 2-1 in a well-played game at Cloquet's Northwoods Credit Union Arena.

Numbers don't always tell the whole story. CEC had the tough task of opening the season against two of the state's top-ranked Class A teams in Orono and South St. Paul. The Rebels are an up-and-coming squad that is serving notice that they will be a section contender for the next few years to come.

In Tuesday's game, both teams had chances in the first period but were unable to score.

"I thought the first period was pretty even in terms of chances," said Rebels coach Reilly Fawcett. "We knew that this CEC team was going to be a tough one to beat, as they have a hard-work mentality, so we had to be solid defensively. They were killing us in the neutral zone so we had to adjust a bit after the first period."

CEC finally broke the ice when Tenley Stewart gave the 'Jacks the 1-0 lead on assists from Dana Jones and Emma Parks.

"Tenley is a leader on and off the ice," Olin said. "She is a great utility player and can fill in where she is needed."

Olin knows the Rebels squad is a tough team to contend with this season.

"Moose Lake is a very hardworking team and deserves credit for their tenacity," she said. "They competed throughout the entire game, even with low program numbers. They are a very young team with a lot of potential."

"CEC did a great job at clogging up the middle and taking away time and space from our goals all over the ice," Fawcett said. "At the end of the day, CEC outbattled and outworked us in the first and second periods."

CEC added an early third-period goal by Marina Dostal at the 1:33 mark, assisted by Frankie Halverson, giving the 'Jacks a 2-0 lead. The Rebels made things interesting at 6:30 of the third when Gracie Hartl pulled MLA to within a goal on a power play - assisted by Mackenzie Hoffman and Julia Jusczak - setting up a wild finish.

"Our girls had a huge push in the third period and that power play goal fired up our team," Fawcett said. "We got a few grade-A chances after the power play goal and I thought we outworked CEC in the third, but just couldn't net another one. I was proud of our girls for battling back." 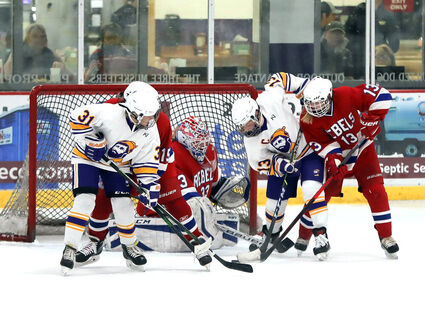 Cloquet-Esko-Carlton's Tenley Stewart (13) gets to a rebound in front of Moose Lake Area goaltender Julia Matson to score a goal.

Credit for keeping the Rebels off the board the rest of the third period goes to goaltender Araya Kiminski - who finished with 13 saves - and the 'Jacks defense.

"We pride ourselves on our defensive-style play, so we were disappointed with the penalties that we took in the third period," Olin said. "Araya is a great athlete and we feel very comfortable with her in net. She faced some very skilled players against Orono and South St. Paul and did a good job keeping us in the game against Moose Lake Area as well."

MLA goalie Mallory Hartl was equally good, finishing with a total of 22 saves on 24 shots.

Fawcett said Hartl was playing through intense back pain and "was in tears before the game."

"They had to rally around her and pick her up in our D zone," Fawcett said. "Our girls did a great job at getting in the shooting lanes and preventing shots to get to Mallory."