The Cloquet-Esko-Carlton hockey team lines up before the home opener. The team got a win against Hibbing.

The Cloquet-Esko-Carlton boys hockey team wasted little time jumping into their early season schedule, playing three games within the past five days. CEC went 1-2 during that stretch after suffering road losses to Andover and Minnetonka before winning at home against Hibbing Tuesday night.

The Lumberjacks opened the day after Thanksgiving against an impressive Andover Huskies team, which is ranked No. 5 in the Minnesota State Class AA rankings, and fell by a score of 4-0 despite an impressive showing in the nets by CEC goalie Jacob Walsh.

"Walsh played well for us and was really good," said CEC head coach Shea Walters. "They had a lot of great chances, but he was aggressive and challenged every shot."

Saturday the Lumberjacks dropped a 5-1 decision to the Minnetonka Skippers. Both games were played in Minnetonka. The Skippers pounced on CEC quickly with three goals in the first period.

"Again, we got very good play from our goaltender Kyle Abrahamson," said Walters. "He challenged all game long and with the caliber of speed they had, his ability to go side to side was incredible and kept us in it until late."

CEC scored the lone goal of the second period on a shot by Wyatt Mrozik to cut the lead to 3-1, but the Skippers kept the pressure on in the third period and pulled away to the win.

"We struggled with putting the puck in the net for the first two games and we also struggled because we had six kids who had hardly touched the ice because they played on the Esko football team that went to state," Walters said. "We have a lot of growing and developing to do in the area of handling the puck when we're under pressure."

In their home opener on Tuesday against Hibbing, the Lumberjacks trailed 2-1 after one period, but scored three unanswered goals to hang on for a 4-3 win.

Jace Stewart gave CEC a 1-0 lead at 15:43 of the first period on an assist by Noah Knutson, but the Bluejackets scored just 16 seconds later to tie the game. Hibbing added another goal with just eight seconds remaining in the opening stanza to gain a 2-1 lead.

CEC scored the lone goal of the second period when Pat Dunaiski lifted the puck over Hibbing goalie Brayden Boyer to tie the game with 39 seconds remaining in the middle period. Freshman Karson Young added an assist on the goal.

In the third period, the Lumberjacks gained a 3-2 lead on a power play goal by Young on a one-timer off a pass by Lucas Rauner at 6:12.

"We went 2 for 5 on the power play and we need to be able to do that," Walters said. "We know it's going to be important for us to find ways to score, so it is a bonus when you can get a couple on the power play."

While CEC was tacking on a couple of power play goals, they held the Bluejackets to 0-4 with a man advantage. That was huge for the Lumberjacks.

"We have always been strong on the penalty kill," Walters saud. "We've got a lot of kids back from last year who played on the PK and they know what to do and how hard they have to work, so it was good to see that."

CEC went up 4-2 at 14:40 of the third period when Carter Salo added an unassisted tally.

"He needed that," Walters said of Salo. "He had four penalties, and he is a captain, so he needed a positive, and he found a way to get what turned out to be the game winner for us."

Hibbing pulled Boyer late in the game and then found the back of the net on a goal by Keegan Fink with 56 seconds remaining, but CEC and goalie Walsh slammed the door for the Lumberjacks' first victory of the season. 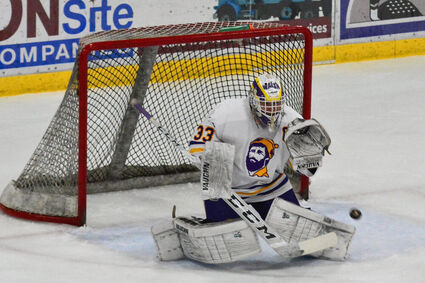 Jacob Walsh had a good night in net against Hibbing.

How important was it?

"It really was kind of a must-win type of situation," Walters said. "We needed a bounce-back win and to get it at home was big for this group of guys. They needed some positives, and they got it in a game that they deserved to win."