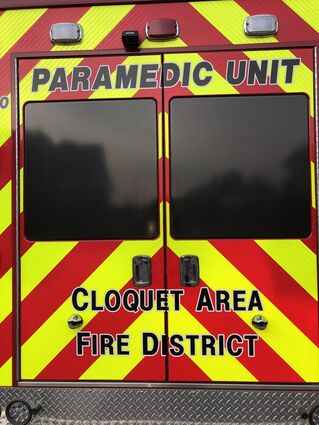 A substantial hike to 2022 Cloquet Area Fire District taxes for ambulance-district-only properties only has Thomson Township residents in an uproar.

Township chair Terry Hill is frustrated with the CAFD’s tax increase, feeling that the township has been “backed into a corner.”

Residents feel that the nearly fourfold increase in the CAFD portion of their 2022 property taxes, without prior notification from CAFD, is too much for the services they are provided and unfair.

Thus, the town board unanimously passed a resolution of “non-support” for the CAFD tax levy increase during its meeting Thursday, Dec. 2. The normally mild-mannered Thomson Town board supervisors made their feelings known in the final paragraph of their resolution.

“WHEREAS, the drastic and immediate implementation of a tax rate which is seven times what is currently in place, without any consultation, discussion or negotiation with the Town of Thomson, is outrageous and appears to be in bad faith.”

Thomson Township is not a member of the fire district itself, but a large portion of the township is part of the ambulance primary service area (PSA) served by CAFD, while a much smaller portion is served by Carlton Fire and Ambulance as part of its PSA. The level of service and payment structure differs between the two. CAFD provides advanced life support, while Carlton provides basic life support. Both ambulance services bill individual patients for services rendered. CAFD is authorized to tax property owners annually, while Thomson Township pays the city of Carlton directly for a portion of the on-call wages: for 2020 that amounted to $3,112 total according to township documents. Carlton ambulance made four calls to Thomson Township that year.

According to CAFD officials, the changes are about equalizing costs among everyone receiving services, after fire district members have paid more than their fair share for a decade due to legislative limits on the fire district’s taxing authority.

Board members discussed township options to deal with the proposed tax increase for township residents in 2022 at its meeting Thursday, Dec. 2.

Township attorney Dave Pritchett showed the board and community members in attendance a large file folder containing all of Thomson Township’s correspondence with CAFD, all meeting minutes where CAFD is mentioned, and all other relevant paperwork dealing with CAFD. Pritchett outlined the history of the township’s relationship with CAFD for all individuals in attendance.

Pritchett began by outlining the history of Thomson Township’s relationship with the CAFD, beginning in 2008. While there have been heated discussions between the two entities in the past dealing with taxes, according to the board’s old meeting minutes, the township had always been included in discussions before voting took place at CAFD, he said. But, without advance discussion with Thomson Township, the CAFD board raised its preliminary tax levy for Thomson residents from 0.019 percent to 0.075 percent for 2022 and to 0.132 percent for 2023, in a phased approach. According to Pritchett, this increase will leave township residents paying a levy increase four times higher than that for residents served by CAFD fire and ambulance, for half the services.

Property owners in the fire district itself, while seeing a lower increase from year to year, will still pay higher overall taxes to CAFD. A Cloquet home with an estimated market value of $201,000 will pay roughly $450 in CAFD taxes in 2022, while a similar home in Thomson Township will pay $152. A Cloquet home valued at $442,000 will pay $1,094 in CAFD taxes, while a Thomson Township home valued at $454,000 will pay $376 in CAFD, according to figures confirmed by the Carlton County Auditor’s office.

Thomson Township residents in attendance were concerned with what can be done since the preliminary levy has already been passed by the CAFD. Pritchett explained that the township receives the CAFD’s services because it is an adjacent community that is within the primary service area. The primary service area is established by the Emergency Medical Service Regulatory Board to ensure that all communities in Minnesota have emergency medical services. While the township would have the right to withdraw from the fire district if they were members, they do not have the right to withdraw from their PSA.

Township resident and Carlton County commissioner Marv Bodie expressed his concerns to the board about the increase. He asked whether township residents would be able to vote on a referendum for a proposed new CAFD building in Cloquet, which has been discussed by CAFD for a number of years. According to Thomson Township fire chief Kyle Gustafson, residents will not have a say in if the potentially $15 million firehall will be built, but they will be on the hook for a percentage of the cost if it is passed.

“It’s a complicated issue,” Pritchett told the Pine Knot Wednesday, adding that he would like to find a way forward that residents served by CAFD could support. “My goal is to solve problems, not make them worse.”

Thomson Township supervisor Jason Paulson — who resigned from the CAFD board after it passed the levy increase on ambulance district residents — said he planned to attend Thursday’s meeting and ask CAFD to honor previous negotiations that would have maxed out ambulance district taxes at 0.048 percent of estimated market value, which is what other ambulance districts in the state got automatically. It was also the previous CAFD target before the state removed the levy caps for fire districts earlier this year.

But Paulson is even more worried about the future fire station plans.

“Esko has 5,600 people. We have our own fire department. We can have our own ambulance,” Paulson told the Pine Knot. “But we need to get it done before the big Taj Mahal fire station is built.”

For now, the township board has expressed its opposition to the levy through its resolution and a letter to the CAFD, and is waiting for a response.

Also Thursday, the board approved the use of township-owned property in front of Town Hall for the Wood City Riders snowmobile trail. With the permission of the township to move the trail from the back of Town Hall to the front, the trail will avoid the power poles and trees.

Township zoning official Dan Stangle reported there were 15 new homes in the township in 2021.

Supervisor Tony Compo announced his retirement from the Thomson Volunteer Fire Department during the meeting, with Chief Kyle Gustafson thanking him for his years of service during his monthly report as well.

The Thomson Township Board of Supervisors meets on the first and third Thursday of the month.