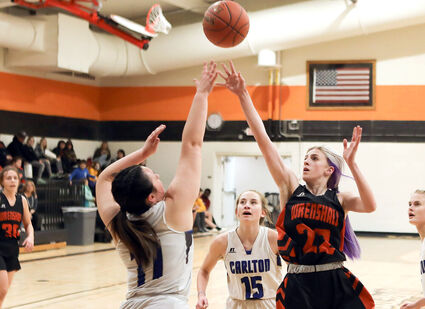 Wrenshall's Liberty Bilges goes up for a basket during Thursday's game with Carlton. Made buckets were a rarity as the Bulldogs eked out a 37-35 win.

While it may not have been the highest-scoring game, last week's Wrenshall vs. Carlton girls basketball game turned into an old-fashioned barn burner with the Bulldogs eventually coming out on top 37-35.

It was an intense game.

"For us, it was the first game of our season and the girls worked really hard," said first-year Wrenshall coach Emma Grover. "I don't think there was any moment that emotions weren't running high or the intensity wasn't up."

Carlton started quickly in the first half and got some key outside shots from Madison Asleson - who finished with a game-high 15 points - as the Bulldogs cruised out to a big early lead. Wrenshall packed things in by playing a zone defense and eventually cut into the Bulldog lead and pulled to within three points at halftime, at 26-23.

"We really weren't ready for them to come out in a 1-3-1 zone," said Carlton coach Brian Hey. "I actually had to take a timeout and actually draw out what we wanted to do on offense. We tried to stretch the defense on the baseline, but we just missed a lot of shots which hurt us and kept the game close."

The big key to the Bulldogs' first-half lead was Asleson, who hit three 3-pointers in the first half.

"From our offensive standpoint we played well on defense, but we just missed way too many shots and we only went 11 for 28 at the free throw line," said Hey. "At practice on Friday we spent a lot of time working on free throws."

Both teams had strong defenses.

Although they struggled to make shots in the first half, Grover sees potential with her Wrens squad.

"During halftime, we chatted [that] being able to come out on top meant we couldn't let them score inside. I am a big believer in zone defense because it is typically tougher for teams to get points inside the 3-point line." 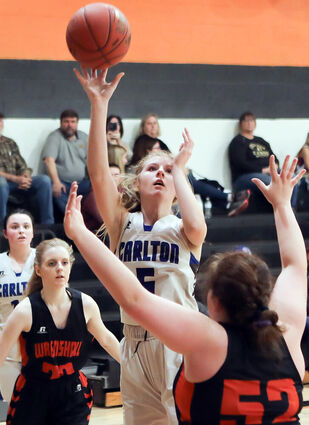 Carlton's Morgan Laveau takes a shot. She had eight points in the game against Wrenshall.

Joining Asleson in scoring for Carlton were Morgan Laveau with eight, and Korah Crane scored five. Megan Matarelli made three points, while Brielle Simula, Haley Ableiter and Emma Peterson all finished with two.

"I thought that Morgan Laveau had a really good night for us as well as Maddie," said Hey. "Morgan hustled on defense and she got a lot of important rebounds for us."

Grover characterized the game as "faster-paced with a little less control," but said she pushed her team and they pushed their opponent. "The entire second half of the game was neck-and-neck and very intense," she said.

On Monday night the Bulldogs hit the road to play East Central and lost 53-19, while the Wrens played at the Fond du Lac Ojibwe school. The Ogichidaag won that game 56-50.