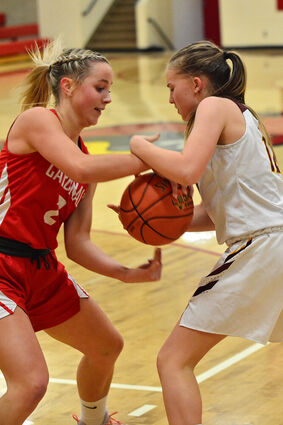 Cromwell-Wright's Siiena Anderson and Barnum's Janaya Jurek wrestle for the ball during Monday's game in Cromwell, a big win for the home team.

The Cromwell-Wright girls basketball team has been a force over the past decade in small-school basketball circles. After opening the season with a resounding win over McGregor, the Cardinals continued their winning ways against Barnum Monday, winning 78-36.

"Barnum was able to hang around throughout the first half of the opening half of play."

By the middle of the first half, the Cardinals led by five. Then they went on a 28-2 run. "Our defensive pressure caused some turnovers and that led to some easy baskets for us," Gronner said.

Eventually the Cards pulled out to a 43-13 halftime lead and never looked back.

"Cromwell is a tough, well-coached team," said Barnum coach Mariah Minkkenen. "They play together offensively and they push the ball well in transition."

The transition game is where the Cards held an edge. "We try to play more uptempo, push the ball if we can and we got many easy buckets late in the first half by beating them down the court," Gronner said.

Eight players hit the scoring column for the Cards. They were led by Sascha Korpela with 21 points and Andrea Pocernich with 19. Joining Korpela and Pocernich in double-digit scoring for the Cards were Siiena Anderson, who had 12 points, and Kyra Granholm, who added 10 points. Isabella Anderson scored seven, Jill Anderson four, Marissa Dahl had three, and Mya Gronner scored two.

"Our depth is very good," Gronner said. "I can play a lot of girls off the bench and production does not drop off." 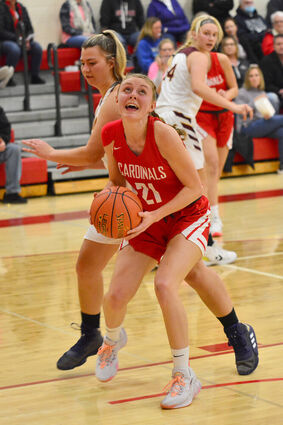 The Cardinals' Andrea Pocernich keeps her eye on the basket at home against Barnum Monday.

Allison Marine was the lone double-digit scorer for the Bombers as she finished with 13 points. Wrapping up the scoring for Barnum were Rayna Klejeski with eight and Anessa Davis with seven. Both Jacinda Wright and Trenity Gladen added three points and Ella Heaton scored two.

The Bombers coaches are looking at the game as a learning experience.

"While the game didn't go like we hoped, I am glad we got to see things we need to work on and to continue to improve on," said Minkkenen.

As good as their depth is already, the Cards could potentially see another top performer return by the end of the season if Natalie Hakamaki is able to bounce back from a knee injury she suffered playing in the off-season.

"I am very happy with our performance the last two games," said coach Gronner. "We hope to build off this and keep improving."