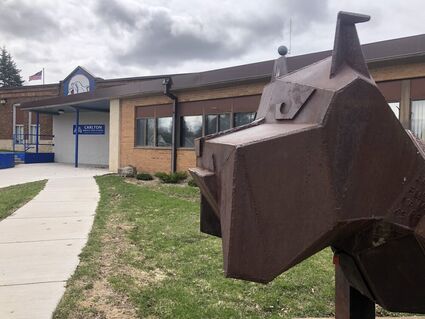 A tie vote by the school board means Carlton High School will not close next year.

It was difficult to hear the pleas from students, parents and other district residents begging the school board to keep Carlton High School open. They were talking through masks and the speakers hanging from the ancient walls weren't optimal in the dimly lit and cavernous "small gym" that also serves as a cafeteria. Custodial machines could be heard in adjacent hallways. There was a varsity boys basketball game going on in the nearby main gym and buzzers and fans could be heard intermittently.

A little after 8 p.m. on Monday, the basketball crowd was chanting "defense, defense" just as the Carlton school board reached the portion of its regular meeting where members would discuss and then vote on the tuition agreement with Cloquet that would eliminate grades 9-12 in the district.

"This is not a new idea," board chairwoman Julianne Emerson told those who stayed for the regular meeting after more than 65 people gathered for an hour-long public hearing. The opportunity for public comment on the tuition agreement was the second scheduled in the past week. A 90–minute version took place the Monday before.

"This is not a rush," Emerson continued, replying to insinuations from earlier speakers that the board hadn't thought long enough about the district's future.

Indeed, the idea of a tuition agreement is more than a year old. There have been numerous meetings leading up to what was deemed a last gasp for a struggling district that can't make enrollment numbers work when trying to keep budgets in balance. There is a nearly $1 million deficit looming, again.

Talk of the tuition agreement began even while the board was still negotiating with Wrenshall about consolidation.

But through it all, board members past and present struggled to get a feel for how district taxpayers felt about any of the plans to stabilize a district on the brink of extinction. They still feel the sting of 70 percent of voters rejecting a 2017 referendum that would have created a K-12 school at South Terrace, now the district elementary school.

District history is littered with failed referendums going back more than 50 years. Ten years ago, the district was trying to rise from the ashes of state-controlled debt recovery. Just before that, the district saw its peak enrollment of the past 20 years when 66 percent of students living in the district attended its schools. Today, more than 60 percent of resident students seek education elsewhere under open enrollment.

The most recent consolidation talks with Wrenshall, also a carousel event in the district's history, was stymied by arguments about tax levels residents would pay in each district and the lack of commitment from the state to help fund building projects to make the consolidation work. Last December, both sides took a "pause" on the whole idea and it was never picked up again.

Carlton superintendent John Engstrom has been pushing the board to decide on the future of the district since he began on an interim basis in 2020.

At the end of the public comment period Monday, Engstrom said people were doing a lot of "talking past each other" and forgetting the elephant in the room while making emotional speeches about saving a school they love.

"The real question is about the future," he said.

A minute after 8 p.m., the hearing was over and the regular meeting, which included the actual board vote on the tuition agreement, began. More than half of the audience filed out of the gym.

What they missed was the board splitting votes on the idea. It went 3-3, meaning the tuition idea was dead.

As the din from the big gym waned, Emerson talked about being "deeply disappointed" about a "missed opportunity."

"I struggle with how you believe this will help our district," an obviously irked Emerson said after the vote, directing her ire at the three board members who voted "no."

Emerson found herself on the same side of a vote with longtime board member Tim Hagenah, who 10 years ago faced Emerson as she was a parent of students, who wanted the entire school board to resign after it was found the district had ignored state "statutory operating debt" rules.

Hagenah had earlier paused long and hard before speaking about the tuition agreement. "It comes down to the finances," he said. He wanted to do what was right for kids, he said, but a failure in public support for the schools left no other choice.

Now, keeping a K-12 school will require massive cuts to staff and curriculum. Hagenah had children in the district 15 years ago and told the students in the audience Monday that they were already attending a wounded school district. "You have half of what they had," he said about the death by little cuts in fighting budget woes the past two decades.

Hagenah said there's little left to chew off the bone and he wondered if more cuts would render the entire school system moot, "just so we can keep a high school."

When asked if he had a taste for the work involved in finding the cuts to come, superintendent Engstrom simply said, "This is why I do one-year contracts."

The public hearings featuring students, parents and taxpayers were emotional and sometimes irrational considering the quandary the district is now in. The question is why students would be drawn to a district facing so many cuts.

Much of the angst in the public meetings came from students thinking about being transplanted into the Cloquet schools, although they'd be able to open-enroll into any area district. Students said Cloquet was too big, too impersonal, and even too dangerous.

Cloquet school board chairman Ted Lammi was surprised to hear that Carlton rejected the tuition agreement. "I'm a little disappointed," he said. "But it sounds like their heart wasn't in it."

He said there are plenty of Carlton residents who attend Cloquet schools and they do just fine. He said the rejection won't change the cooperative nature of the relationship between the districts.

That shrug of the shoulders echoed the Cloquet superintendent's sentiments.

"We've been doing our best to be a good neighbor and try to help give the Carlton board a constructive option for them and their kids," Michael Cary said. "It's up to them if they want to be a part of that offer."

Cary said he felt the agreement would have benefited both districts. "But I understand that is a hard decision and it's their decision to make, not ours."

"I like Cloquet," Szymczak said Tuesday. "We went on a tour. It's an amazing school, almost too good to be true. I hope we can continue our good relationship."

Board member Sue Karp praised the cooperation with Cloquet. "It could be a positive," she said of Carlton students having the option to attend there.

"Cloquet has been a good partner in all this," Engstrom said.

Superintendent Engstrom warned of some of the realities facing a K-12 district in a report he offered Monday after the second public hearing and before the board vote. It included drastic cuts in the technology used in the district, a reduction in administration - such as not hiring a dean of students and cutting the superintendent to part-time, cutting electives and extracurricular activities, and staff cuts.

If the district could pass a levy referendum for the maximum of $400,000 next year, it would still need to find $500,000 to trim from expenses. That's a figure Engstrom worked with in finding preliminary savings.

Engstrom said on Tuesday that he wasn't surprised by the rejection of the tuition agreement because he "really didn't know what to expect" from the board. He said members now need to make "painful" decisions on cuts. "There are no sacred cows," he said.

Board members voting yes on the tuition agreement - Emerson, Hagenah and Sue Karp - showed lament in losing the high school but peppered their thoughts Monday with the alternative.

"It's the hardest decision of my life," Sue Karp said during the discussion before the vote. "But we can't keep deficit-spending."

"It breaks my heart," she said.

Hagenah said he wonders about the commitment by the public to support the school so many wanted to keep, especially after the referendum failure in 2017.

"Do you really care about education here?" he asked.

Have voters changed, especially under the prospect of losing the high school? "I don't think so," Emerson said. "I actually think there's a strong but quiet 'vote no' group."

She thanked those who spoke up in the past week, but said they are only a fraction of the voting public.

The cuts will be painful, she said. "You can't sidestep" that reality.

Those voting no - Gustafson, Ojibway and Eryn Szymczak - were mostly silent at the meeting, but hinted that they didn't feel the tuition agreement would solve overall structural problems in the district. Gustafson was the only board member with a "no" vote who expressed her feelings before the vote. She feared that losing the high school would in turn jeopardize attendance at a K-8 school. She also said there wasn't enough information on how the district would support a K-8 school. The current South Terrace building can't hold that many grades.

Ojibway has said in the past that he was bothered by Carlton students not having athletic opportunities in the larger school.

The morning after the meeting, Szymzak said she was listening to constituents and was ready to make the difficult decisions to keep a K-12 district running. She said the tuition agreement, while an option to stabilize the district, was "not a full plan."

She said that coming to the edge of extinction for the high school has captivated a public that hasn't been active on school board issues in the past few years of consolidation talk with Wrenshall and the negotiations with Cloquet. "We have our community's attention," she said. The road to the district's solvency will take "baby steps," she said and she was ready to make "clear and bright" decisions to get it there.

Emerson said on Tuesday that the board will have to be on track immediately as it reorganizes for the new year. Like a year ago, when she was re-elected to the board after a two-year hiatus, she expects hard goals to be set. She was named chairwoman in January and, after consolidation with Wrenshall became moot, whipped board members into setting hard goals to have a viable solution for the district by year's end. They accomplished that, she said, and will have to get there again.

The historic vote came at 8:46, after board members spoke and exactly as the basketball game ended. The Bulldogs lost a squeaker in overtime. But the high school was saved.

"The whole thing is unfortunate," Gustafson said later in the week. She didn't have enough information on what the district would look like with just elementary and middle school classes. She admitted that her "no" vote won't change the financial realities, unless something miraculous happens.

She said she wanted to be careful and not sound too pestimistic, but she wasn't saying anything new that other board members and those who watch the district carefully know in the back of their minds.

"Is it a slow or a fast bleed? Either way, I don't think (the district) will survive."