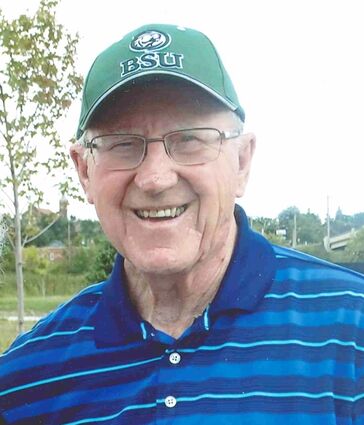 Roland Bromberg, 88, of Northfield and formerly of Cloquet, passed away Dec. 22, 2021 at Benedictine Living Community in Northfield.

Roland was born Sept. 4, 1933, the son of Olof and Emma (Knuti) Bromberg, on the family farm in Aurora. His father worked for Red Owl and the family moved throughout northern Minnesota before settling in Fergus Falls.

In 1951, Roland graduated from Fergus Falls High School,where he was a standout athlete, lettering in football, basketball and track, and was named football captain and awarded Most Valuable Player. He then attended Bemidji State University where he received his bachelor’s degree in physical education and a minor in biology in 1955. At BSU, he played football, basketball, track and baseball. Again, he was named captain of the football team and earned the Koefod Memorial Award as the highest-scholastic athlete. Most importantly, he met his future wife at Bemidji State, Ilene Johnson. Following Bemidji State, Roland furthered his studies at the University of Illinois where he received his master’s degree and the couple had their first daughter, Patty.

The family moved to Reading, Michigan, where Roland taught physical education and biology. He was also the head football coach as well as head track and assistant basketball coach. There, a second daughter, Jane, was born. In 1958, an opportunity came to move to Cloquet, where Roland continued to teach physical education and coached football, wrestling and track, and served as athletic director. It was there they completed their family with a son, Mike.

Roland received many awards in recognition of his many years as a successful coach and educator. He was named All Tri-State coach of the year, head coach of the North All Stars during the Minnesota High School All Star Football Game, named to the Minnesota State Coaches Association for 25 years of coaching, Region 7AA Athletic Director of the year, and was selected into the Fergus Falls, Bemidji State University, and Minnesota Football coaches halls of fame. When Roland wasn’t coaching, he refereed many regular-season basketball games as well as regional finals and state tournament games, which he enjoyed. He was also the director of the Red Cross swim program.

Roland was active in the Cloquet community as well. He served in the Kiwanis Club, for United Way, and on the Cloquet Co-op Credit Union scholarship committee, and was also on the Cloquet Journal advisory board. Roland was active in Zion Lutheran Church, where he was a member and served three terms on the church council. In the midst of all this, Roland and Ilene enjoyed spending time with his family at his sister’s cabin on Chub Lake. In their later years, they wintered in Mesa and looked forward to getting together with a group of other Midwesterners. In 2020, the couple moved to the Benedictine Living Community in Northfield. Sadly, Ilene passed away in November 2020.

Roland is survived by his children Patty (Mark) Shaw of Northfield, Jane Wichmann of Sioux Falls and Mike of Richfield; five grandchildren and seven great-grandchildren (and one on the way); a brother, Steven (Janet) of Monticello; and a sister, Helen of Golden Valley. He was preceded in death by his wife Ilene (2020) and his parents.