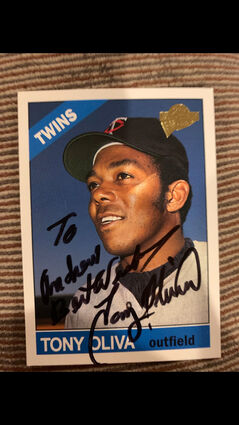 Tony Oliva gladly signed a card for the Korby family during a chance meeting in Hinckley.

Santa Claus came a few weeks early, bringing presents for Minnesota Twins fans. First was the news that Byron Buxton had signed a long-term million-dollar contract. The talented but oft injured Buxton will continue to gallantly track down fly balls for the next seven years at Target Field as the Twins center fielder.

Second, and this has been on Minnesota baseball fans' holiday wish list for decades, Twins immortals Tony Oliva and Jim Kaat were chosen to be part of the July 2022 Baseball Hall of Fame class to be celebrated and recognized in Cooperstown, New York. Twins fans must have been nice this year.

When Washington Senators owner Calvin Griffith moved the franchise to Minnesota in 1961 to become the Twins, it brought long-awaited gratification. Washington had the unenviable reputation as being "first in war, first in peace, and last in the American League."

The Twins, however, had a younger lineup that made it a contender quickly and took the team to the World Series in 1965 against the Los Angeles Dodgers. Oliva was the American League Rookie of the Year in 1964 and batting average champion in both 1964 and 1965. Kaat was the big left-handed pitching star for the Twins and 16-time Gold Glove fielder for his position.

In the 1960s, there was no freeway from Duluth to the Twin Cities area. To get from the north to Metropolitan Stadium in Bloomington on old Highway 61 was a full-day, if not overnight, excursion. Newspapers and little portable AM radios tuned to Duluth station KDAL were the main means of keeping track of the Twins or other sports.

The Vikings were a new team as well. There wasn't professional hockey here until 1967. Very few games, of any sports, were on television. There was no ESPN, cable, MLB Network, cellphones - times were definitely different. Yet, dedicated Twins fans followed the ball club diligently, in many cases for life. The Twins set attendance records in those early years.

My aunt Helen and uncle Clifford took me and my little sister to my first Twins game in 1965. I got to see the impressive Oliva in person when I was 11. I went to a few other games in the next few years, with no other distinction other than getting to see one of Harmon Killebrew's 573 career home runs. He was my hero then.

Fast forward to 1976. My classmate, Chuck Hoyum, his brother, George, and Gary Carlson were going to a Twins game against the Detroit Tigers and asked me to tag along.

This was Oliva's last playing year and he was on his last legs. As a stunt, the Metropolitan Stadium grounds crew released homing pigeons before the game. Oliva was the designated hitter. His knees were shot and had been for a few years and he could barely run or play in the field. On that day, Tony had four hits off Mark "The Bird" Fidrych. It was the 28th and last time Oliva got four hits in a game. The Twins lost but it didn't matter to us. We knew we had witnessed an extraordinary performance from a tremendous ball player.

My friend and high school battery mate, Frank Yetka, was also a big Oliva fan going back to childhood. Frank and his wife Christine were, a few years back, attending a Twins game at Target Field. Between innings, Frank and Christine had gone to the concourse for a break and to get a snack. Larger than life, there was Oliva grabbing a quick bite at Tony O's Cuban Sandwich eatery. (Oliva is still on the Latin network that broadcasts the Twins games on the radio.) Without hesitation, Oliva took time to chat with Frank and get a picture taken together.

He always seemed to treat fans with respect, which probably contributed to his many years of adoration from Twins aficionados.