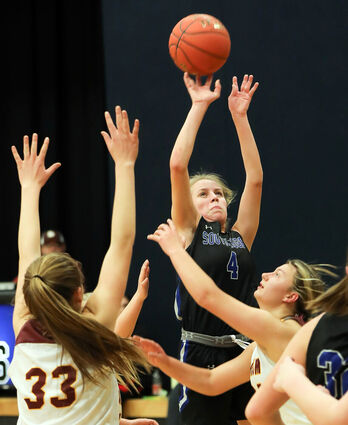 South Ridge's Svea Snickers shoots through a sea of hands against Barnum Thursday. The Panthers cruised to a 68-24 win.

The South Ridge girls basketball remained unbeaten with an impressive 68-24 victory Thursday at home over Barnum in a Polar League Conference matchup.

The Panthers used defense and solid shot selections and were able to build up a huge lead in the first half, taking a 30-13 lead at the break.

Adella Olesiak and Rylee Young each had eight points in the first half for South Ridge, but were 0-5 from the free throw line.

Panthers head coach Brad Olesiak said his team improved defensively Thursday. "We had a plan to play and deny the basketball to Rayna Klejeski and we did just that, holding one of their best players to only three points on the night," he said.

With the Panthers shutting down Klejeski it forced the Bombers to rely on some younger and less experienced players to lead the Barnum attack. Klejeski entered the game averaging almost 16 points but was held to only one field goal, a three-pointer for the Bomber junior.

Coach Olesiak said the Panthers need to continue to focus "game in and game out" on team defense. "That should help us throughout the season," he said.

"We have a talented team," said Barnum head coach Mariah Minkkinen. "Our girls can score, but we need to give them some more opportunities."

The second half saw the Panthers continue to roll offensively, outscoring the Bombers 38-11 in the second half.

"Although we got the win, we still have things to work on, including our free throws, and unforced turnovers at times," coach Olesiak said. "It's a long season and we had a short time to get ready: coming from volleyball to basketball was a quick transition." 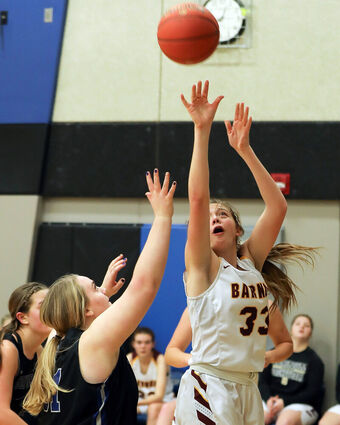 Allison Marine led the Bombers with 10 points in the loss while Jacinda Wright ended with 9 points, with all of her points coming from behind the three-point line. Ella Heaton was the only other Bomber to score Thursday and finished with 2 points.

The Panthers are 6-0 on the season. They are off till the Ely Holiday tournament on Dec. 27-28.