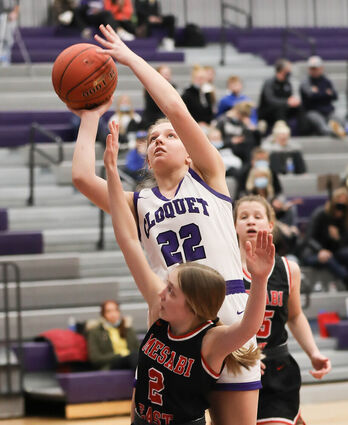 Cloquet's Ava Carlson shoots over Mesabi East's Alexa Fossell during Tuesday's Wood City Classic game. The Giants rallied in the second half to clip the 'Jacks.

Mesabi East used a furious second-half comeback to defeat the Lumberjacks 51-49 in the opening round of the Wood City Classic girls basketball tournament Tuesday night.

The Lumberjacks had a strong first half as they built a 29-17 lead behind 14 first-half points by Maddie Young.

"I thought Maddie had a good first half and played well for us," Cloquet coach Heather Young said. "In the second half she started to try and do perhaps too much and altered her shot. As a team, we need to learn sometimes you have to go hard and just finish the play. We probably left 10-12 points on the floor on shots that were bunnies. We just didn't execute enough."

"They had a little height to them and we didn't defend them well in the second half," coach Young said. "We struggled with their screen and rolls. Sometimes our defender didn't get high enough and other times we didn't help each other out."

The Lumberjacks led late into the game, but with a little more than four minutes remaining, the Giants gained a three-point lead. Kiley Issendorf came up with a key steal and was fouled with 1:40 to play. She made a pair of free throws, giving Cloquet a 46-45 lead, but Marta Forsline made a running shot with 1:26 left to give Mesabi East a 47-46 edge, followed by Kora Forsline bank shot to put the Giants up 49-46. Again, Cloquet fought back as Maddie Young got inside for a bucket to pull within 49-48, but a pair of free throws by Kora Forsline pushed the lead to 51-48. Cloquet managed the front end of a one-and-one by Alexa Snesrud, who then missed the second shot on purpose - hoping the 'Jacks could get the rebound trailing by two points with 5.2 seconds left. Unfortunately for Cloquet, Hill grabbed the rebound and the Giants to take the 51-49 win.

"I like the way Justice is working on her game," said Young. "She is adapting well to what we are asking from her and she is coachable and wants to learn."

Others scoring for Cloquet included Snesrud with eight points, Issendorf with three, and Addison Thompson, Caley Kruse and Ava Carlson scored two each.

"That was a tough game to watch and lose in that second half," said Young. "It's tough when you knew going into the game what they wanted to do and we practiced it, but then in the game we didn't execute the plan. We'll learn from it and get better for it."

The Lumberjacks were set to play for third place against Virginia on Wednesday. The loss Tuesday dropped Cloquet to 6-3 on the season and the win improved the Giants' record to 5-2.