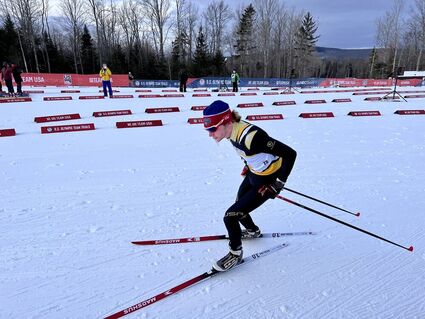 Cloquet grad Aidan Ripp competes at the Olympic Trials in Lake Placid, New York, on Dec. 24. He competes in the sport of Nordic combined, a combination of ski jumping and cross country skiing. Ripp took 12th place, with only the winner qualifying for the Olympics next month.

Cloquet's Aidan Ripp squeaked into the Olympic Trials last week, took 12th place competing against the top Nordic combined athletes in the U.S., and feels pretty good about it.

"The goal for me was to get there," Ripp told the Pine Knot this week about Friday's competition at Lake Placid, New York. "It was a fun time with no real pressure. Not to be un-optimistic, but to get to the Olympics I would have had to win everything, beat all the top athletes. It was kind of out of my wheelhouse."

Ripp, a sophomore at Paul Smith's College in New York state, qualified at the Continental Cup event in Beijing, China, Dec. 4-5. He competes in the sport of Nordic combined, a combination of ski jumping and cross country (aka Nordic) skiing. Ripp needed "cup" points to make the trials, and China was his last chance.

To get points, a competitor has to place in the top 30 or lower, and Ripp had not scored any points in the last season. Some people had skied in U.S. Continental Cup races with 29 racers, so they automatically got points. Ripp hadn't been so fortunate.

"It all worked out in a crazy fashion and I ended up competing in China the week before my finals," he said. Out of 31 competitors, Ripp placed 24th on Day 1, and 29th on Day 2 of the competition, good enough to get him into the Olympic Trials at Lake Placid, home of both the 1932 and 1980 Olympics. Of course, the 2019 Cloquet grad had to get back to the U.S. first, finish his final exams for fall semester, and drive home for a week before heading back to New York. "It's been a crazy month," he said Monday night. "I'm content now."

If Pine Valley was his skiing and jumping backyard as a youngster growing up in Cloquet, Lake Placid is now Aidan Ripp's home base. He practices ski jumping at Mt. Van Hoevenberg near Lake Placid with teammates from Paul Smith, a university that exists, in part, to try to train a higher class of Nordic combined and biathlon athletes. The 21-year-old said the trials were a joyful experience, in part because he didn't feel a lot of pressure, and because the fans (including his family) were amazing.

"I've never skied in front of a bigger crowd. It was more fans than I've seen before," he said. "It was pretty crazy and really fun."

Only the winner at the Nordic Combined trials Friday, Dec. 24, qualified for the Olympics. That was 31-year-old Taylor Fletcher, who will be competing at his fourth Olympics.

Ripp said his jumps weren't the best, but he felt like he did fairly well with the cross country skiing part of the competition. Ripp took 12th out of 13 competitors, which he is happy with, since they are among the top Nordic combined athletes in the country.

He said he knew all of the competitors, whose ages ranged from 18 to 31. "It's a really small community," he said.

After his crazy month, Ripp was enjoying time with his family at Lake Placid this week, relaxing a bit while his younger sister Charlotte - a junior at Cloquet High School - competes in a Junior World qualifier, also in Nordic combined. Mom and dad, Caroline and Ken Ripp, are there, but big brother Nolan had to stay home this time.

"It's been really nice to see my family here; we didn't get to see much of each other this fall," he said.

Ripp said he plans to continue with his studies at Paul Smith, where he is a biology major, and keep training and competing in Nordic combined. His next big Nordic combined competition probably won't be until March, but he has college Nordic ski races almost every weekend.

"Nordic combined is a lot of fun and I'd like to see where it takes me, but not be a slave to it," he said. "I allow myself to do other things, have fun."

Ripp said he will probably watch the Winter Olympics from his dorm, but he will watch the ski jumpers with the knowledge of someone who jumped there already.

"The jumps themselves are similar to the European jumps, but the superstructure of the jumps was incredible," he said. "The size of everything there was enormous."

The XXIV Winter Olympics run from Feb. 4-20 in Beijing and towns in the neighboring Hebei province in the People's Republic of China.