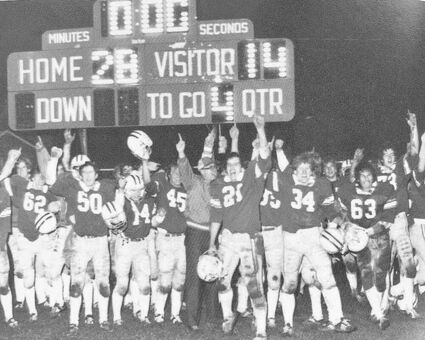 Roland Bromberg, center, celebrated with his 1983 Lumberjacks football team in this yearbook photo. Like many Bromberg teams, the 'Jacks went undefeated in the regular season.

When you walk into the Cloquet football field complex, you'll see a picture of a man with glasses holding a football. The high school football field is named after him. Roland Bromberg, known to many as "Rollie," "Brom" or "Rol," was a former coach, teacher and administrator for the Cloquet School District. He passed away last Wednesday in Northfield, Minnesota.

After growing up as an outstanding high school athlete in four sports in Fergus Falls, Bromberg went on to star in four sports at Bemidji State University. That's also where he met his wife, Ilene, who passed away last year. The Brombergs moved to Cloquet in 1958, and Rollie certainly made his mark here.

Most boys who attended Cloquet High School in the 1960s and into the 1980s would have had Bromberg in their lives either as a football coach, physical education teacher or, at minimum, their athletic director.

On the football field, Bromberg believed that Cloquet boys were tough. He was a firm believer that games would be won in the trenches. He was confident his boys would win just based on their heart and toughness alone. More often than not he was correct. Bromberg coached many teams in the 1960s and 1970s that either didn't lose a game or lost only a game or two. They were always good, tough teams.

He surrounded himself with a top-notch coaching staff that included people like Bill Kennedy, Jim Zack, Dewey Johnson, Mike Becker, Dave Burgett, Ken Schloer as well as others. Many of those coaching icons are no longer with us, but all of them left a positive influence on the school and community. None more so than Coach Bromberg.

"We had quite a coaching staff and that was because of Brom," said Ken Schloer, one of Bromberg's longtime assistant coaches who became head coach after Bromberg's retirement. "Rollie delegated and he expected you to do your job. We were lucky in those days because we had a great group of guys coaching who got along extremely well and we had tough kids who could play football."

Young kids would watch those teams and dream one day of taking the field with Bromberg.

In the fall of 1976 the Lumberjacks team was a powerhouse. Even Bromberg, who had undefeated teams in the past, said that team was one of the best he'd had. With Kevin Peters, Bruce Twaddle, Greg Kolodge, Brett Milberger, Pete Hennum, Tom Johanson and other other talented players, the 'Jacks rolled to an undefeated season and finished as the runner-up in the Minnesota State Class AA Tournament. Back then Class AA was the large-school class, so the Lumberjacks were paired up against some of the biggest schools in the state.

"I considered it an honor to have played for Coach Bromberg," Peters said this week. He was the star running back on that 1976 team and went on to have a two-year stint with the Minnesota Gophers before winning a national title at North Dakota State University. "He was a straight-forward block-and-tackle coach that believed in being consistent and physically outplaying our opponents."

Twaddle, who was the quarterback and among many players who extended their careers into college, said Bromberg was the "best coach I ever had."

He said he was fair and had a lot of respect for his players. "He was a fun guy to play for."

Unlike many coaches, Bromberg was not about being flashy and he coached that way as well. If his football teams passed more than four or five times a game, it was unusual.

"He wasn't a yeller," Twaddle said. If you screwed up, he'd come over and talk to you, he said.

But that calm demeanor was not on display as Twaddle and just a few of his teammates lingered in the locker room after winning what was called the "Super Bowl" back then, the clash between the winners of the Iron Range and Lake Superior conferences. Cloquet whipped Grand Rapids.

Twaddle recalls many teammates going to the A&W while coaches waited to get a call about making the playoffs or not. Back then, placement depended on a scoring system among the top teams.

Bromberg came out of the coaches' office screaming "We're in, we're in," Twaddle said with a laugh. It was a lot of emotion for the usually cool coach.

"I will always remember his green football pants ... at practice. Those pants had a few years on them," Peters said.

"Rollie was always respected by his players and other coaches," said Greg Kolodge, who went on to play at NDSU and the University of Minnesota Duluth. "He maintained relationships with many of the athletes he coached and the students he taught, and he was genuinely interested in their lives beyond high school. He was always eager to talk and reminisce about athletics and CHS. I was fortunate to have known him as a coach, teacher and friend."

Bromberg is on hall of fame lists from his time as a player, coach and administrator. As a physical education teacher, Bromberg was exceptional. As a coach he was as good as they come. But it was as a person where he made his mark.

Bromberg believed in giving back to the community that was so good to him. He was a member of the local Kiwanis Club, was involved with the United Way, and served on the Cloquet Co-op Credit Union Scholarship Committee. Rollie was also involved in the Zion Lutheran Church near his former home on Washington Avenue.

Bromberg's passing leaves very few of the old-guard coaching staff left. Some passed away far too early and others, like Bill Kennedy, died more recently. That has left its mark on fellow coach Schloer. 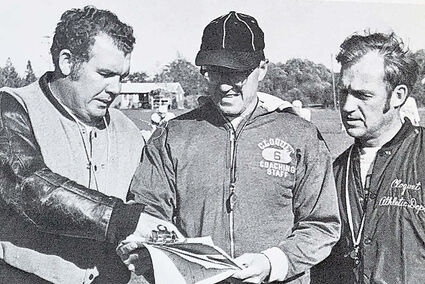 "Yes, it is so hard to lose the guys you had so many good times coaching with, and memories of time together," Schloer said. "I recall going to Sunday night film sessions at Brom's and Ilene having coffee, ice cream and cookies for us. Oftentimes we'd go out to dinner together, but like everything else we are all getting older and all we can do is hang onto the memories of those good people."

"We all just loved football," Twaddle said. And Bromberg made that so.

He made an impact on so many people in our community. It is more than just a picture of a legend at the field. It is a picture of history. History that I hope will never be forgotten.

Pine Knot News sportswriter and Cloquet grad Kerry Rodd has been covering Carlton County sports for decades on the radio and in print. Contact Rodd at [email protected] news.com.