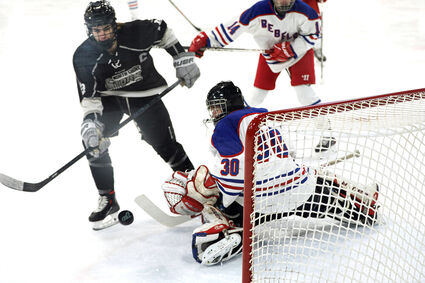 Playing with a young roster and far fewer players than most, the Moose Lake Area boys hockey team faces steep odds nearly every game they step onto the ice. But after opening the season with eight straight losses, the Rebels finally found their first win of the season on Dec. 17 when they downed North Shore 6-2.

"From where we started the season, this group is much improved," said Rebels coach Lee Costley. "We have a lot of young kids who are stepping up from the bantam level and they have to learn what the high school game is all about. We are starting to see them make some of those

After being beaten by Ely 6-0 on Dec. 11, the Rebels bounced back with a close 4-3 loss to Ashland on Dec. 16 followed by the win over North Shore a day later.

"We've been getting very good goaltending from Richie Balut," Costley said. "Right now he's playing so well, his saves percentage is over 90 percent and our defense is starting to understand what playing high school hockey is all about compared to when they played bantams, and that makes a difference."

On Tuesday, the Rebels played in the Proctor Bill McGann Hockey Tournament and took on North Shore for the second time in two weeks, but fell 4-2. 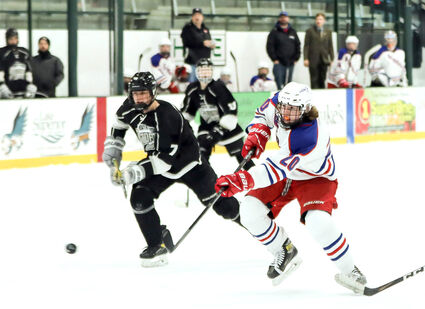 "We led 2-1 after two periods, but we ran out of gas in the third period," Costley said. "We had a couple of kids out due to Covid and another got a possible concussion in the game, so we played with just nine skaters."

Despite the loss on Tuesday, the Rebels continue to show they are improving daily.

"Our goalie played well again and we had the lead entering the final period," Costley said. "It's tough to hang with teams when you end up so short because kids are constantly putting in way too much ice time and sooner or later your legs can't go anymore."

Red Lake, both from

"It'll be tough for the guys to turn around after Tuesday's game and play, but we'll lace up the skates and get back out there and see how we do," Costley said on Tuesday night.

Following Tuesday's loss the Rebels were 1-10 on the season.