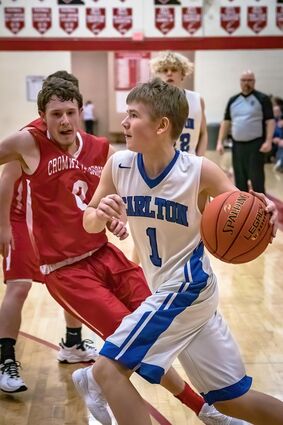 Carlton's Jack Korpela makes a drive along the baseline in a loss to Cromwell-Wright Tuesday.

Something had to give when Cromwell-Wright and Carlton collided in boys basketball Tuesday night in Cromwell. The Cardinals were coming off back-to-back losses in the Wood City Classic and the Bulldogs were trying to snap a four-game winless streak. In the end the Cards used their home court advantage to slip away with a 41-33 win.

"I don't think either team shot well and we were very sluggish in the first half, but you have to give credit to the Carlton defense," said Cards coach Bill Pocernich. "They came out in a 2-3 zone defense and we wanted to shoot them out of it, but we struggled shooting the ball in the first half."

The first half ended with the Cards clinging to a slim 18-15 lead as the feisty Bulldogs hung tight.

"I thought at the start of the game our zone was good and we made them take some shots they didn't want to take," said Carlton coach Shawn Filipiak. "Offensively, we were just sloppy because we forced too many passes and had too many turnovers."

Pocernich said his team struggled to score in the first half. "In the second half we did a little better job of taking care of the ball, but in the end the kids found a way to get the win."

The Cardinals' ability to find a way to penetrate the Carlton defense led the Bulldogs into a man-to-man defense. 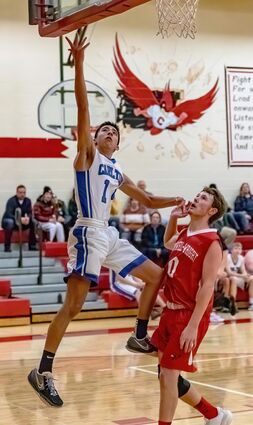 "We had to come out of the zone because we were trailing and needed to try and up the tempo of the game," said Filipiak. "I thought defensively we did a good job of taking away the inside and played tough there, but we needed to be better passing and taking care of the ball."

Dylan Nyberg led Cromwell-Wright, and all scorers, with 15 points while Noah Foster added 12 for the Cardinals. Sam Ojibway led the Bulldogs with a 12-point effort and was the only Carlton player in double-digit scoring.

Ethan Shelton and Nathan Eliason both added five points for Cromwell, along with two points each for Michael Zoeller and Liam Schoenberg.

Other Carlton scoring came from Luuke Korpela (8), and Dante Thompson (5). Both Jack Korpela and Zander Rubesh had three points and Noah Olsen finished with two.

Tthe Cards improved to 5-3 while the Bulldogs dropped to 2-5.