Skiers set sights under the lights 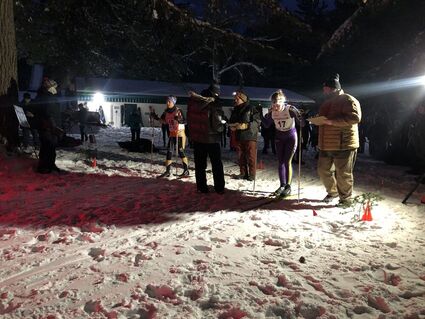 Esko's Halle Zuck prepares for a quick start during Tuesday night's Cloquet Invite Under the Lights at Pine Valley, as volunteers Pat Marciniak, Ken Ripp and Glenn Sorenson keep the line moving and skiers starting on time. Zuck finished second in the girls race with a time of 18:34.1.

While skiers sped off into the darkness like clockwork every 30 seconds for nearly three hours - spanning boys and girls varsity, junior varsity and junior high races - volunteers kept things ticking. Inside the chalet they served warm food, organized racing bibs and kept the wax room running. Outside, even more volunteers timed the race from start to finish, herded racers, kept the fires going and manned outposts on the trail in case a skier needed assistance.

After spending most of the previous two days getting ready, Cloquet-Esko-Carlton head coach Arne Maijala said the meet went smoothly, with a total of 249 skiers participating.

"There were no crazy moments, other than we had to start both clocks and all timers twice to get it all in sync," Maijala said, referring to separate timers at the start and end of the race.

The volunteers had to work extra hard because the Steve's Timing folks were up at Ely, so Cloquet had to manually time and enter race results, versus having chips for each racer. Maijala praised Marshall's Dave Johnson for his work entering the times.

"We were able to print out results while the meet was happening," said the pleasantly surprised Maijala.

Those results were particularly good for the Lumberjacks girls varsity team, which placed second in the meet with 357 points compared to winner Duluth East with 384 points. Proctor/Hermantown placed third with 343 points, Mora fourth with 337, Marshall fifth with 327 and North Shore third with 233, but only three skiers counted versus the top four for the other teams.

Not surprisingly, Esko senior and veteran state skier Halle Zuck was the top Lumberjacks girls skier in the classic-style race, taking second to Proctor freshman Della Bettendorf, who finished more than a minute ahead of the rest of the field in 17:19.9 compared to Zuck at 18:34.1 and East's Jenna Johnson at 18:38.1 in third.

The Cloquet boys team finished in fourth place Tuesday with 339 points. East took first with 391, Mora second with 357, Proctor Hermantown third with 356. Marshall and Denfeld both finished with 300 points.

CEC Nordic is a large team, with close to 70 kids skiing in grades 7-12. Maijala gets important help from assistant coach Tim Stark, an excellent skier with head coaching experience, and Ann Gustafson, who oversees the middle school program. Both coaches have a passion for skiing and working with kids, and Maijala tries to make sure they have lots of time to do that, while he makes sure the numbers part of running the large program is taken care of.

Tuesday was the third meet for the Lumberjacks in a season that had limited snow until about a foot of snow fell at the end of December. The first two meets - on Dec. 9 and Dec. 17 - were both held at the Grand Avenue Nordic Center in Duluth, which has snowmaking equipment.

Maijala said both CEC teams placed in the middle of the pack at those larger meets, which featured as many as nine teams.

Maijala talked about his top skiers - naming Prosen, Fischer and Jordan Chopskie for the boys along with Zuck, Megan Chopskie, Gunderson and Tracy for the girls - but said there are more strong skiers coming up through the ranks.

Freshman William Bauer - younger brother to Benjamin, CEC's former top skier - is one to watch. "He has really good technique but he's growing so fast. Once he catches up (with his growth), he's going to be a force like his brother," Maijala said. Other boys he expects to contribute include junior Hunter Williams and sophomore Emmett Prosen, younger brother to Cale. "Emmett has obviously trained more than in the past so he will really be able to go the extra mile; he just has to work on technique, and we'll see big gains," Maijala said.

The Chopskie twins are both talented skiers and overall athletes, with Jordan placing in the top three among CEC boys the first two meets and Megan as an outstanding track athlete as well. 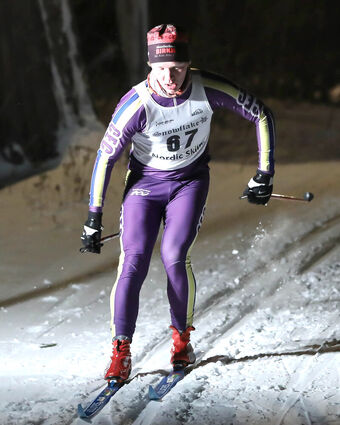 Cloquet's Cale Prosen finishes the Cloquet Invite Tuesday night at Pine Valley. Prosen was the top Lumberjack boys finisher with a time of 16:48.5.

On the girls side, Maijala expects to see Zuck make a return trip to State. Another top local skier is Cloquet junior Charlotte Ripp. Ripp is competing in Nordic combined - which combines ski jumping with Nordic skiing - on the national and international level so likely won't be competing for CEC much this year. However, Harmony Tracy and Amelia Allen are both healthier now, after struggling with injuries during cross country running, so Maijala expects to see them contribute more as the season progresses.

Maijala also mentioned seniors Zach Erkilla, Thorin Brown, Grace Shingledecker and ninth-graders Shealee Shingledecker and Aspen Berg. Esko runner Grace Hrabik came out for the first time as a senior. "If her technique comes along, she may surprise herself," he said.

CEC Nordic will travel to Giants Ridge for their next competition Saturday.