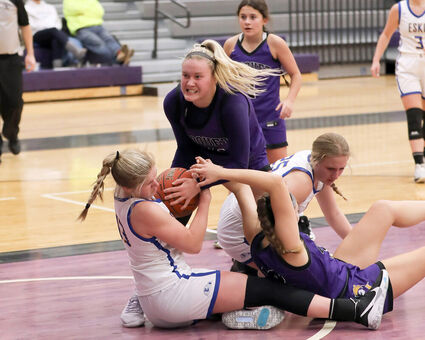 A tenacious defense and a key first-half run were just enough to give the Cloquet girls basketball team a narrow 66-61 victory over Esko in Cloquet last Thursday night.

"We pride ourselves on playing a tough man-to-man," said Cloquet coach Heather Young. "We work hard on positioning but need to improve on constant communication. To cause Esko to turn it over 20 times along with the ability to get 11 steals is a nice stat to see. Esko is a well-coached team. They shoot the ball well, transition and hit the boards hard."

The game was tight through the midway point of the first half when the 'Jacks managed to get a few quick baskets off transition and steals as they went on a 14-2 run.

"When they went on that run we never recovered," said Esko coach Scott Antonutti. "We had too many turnovers and didn't play good enough defense to win. I thought Cloquet was the more aggressive team."

"Jayden is an aggressive, confident scorer and the most important attribute in my mind is her desire: she just never gives up regardless of how things have gone for her earlier in the game. That is what I think makes her special," Antonutti said. "I think Maddie (Young) has that same kind of desire that Karppinen has, she believes she is going to get to every rebound and loose ball. It doesn't matter to her that the last play was good or bad, she is going to get after it on the next play."

Key to the Cloquet win was the ability to get solid scoring from throughout their lineup and not having to rely just on Young for offense. They put forth a solid team effort on both ends of the floor.

"It is always nice to have more than one horse in the race when it comes to scoring," said coach Young, Maddie's mom. "Our team needs to have multiple girls scoring in order for us to be successful. Also, other girls contribute in other ways like Katie Turner who has played such solid defense for us along with Kiley Issendorf. Quinn Danielson is proving more and more each game that she can play both sides of the floor for us. It is just fun to see this all emerging."

The second half was played at a solid pace with both teams having their moments on offense, but the Lumberjacks were able to cling to their slim halftime lead and eventually sneak away with an important five point victory. 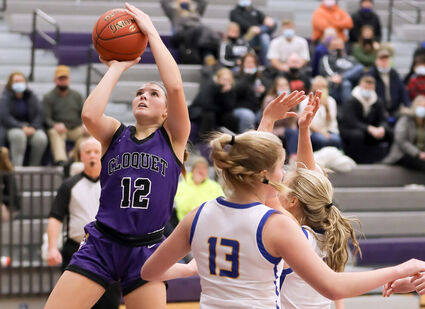 Joining Karppinen in double digits for Esko were Aila Gabel with 16 and Kyra Johnson with 11 points. Also scoring for Esko were Kallie Sinnott with six points and Avery Kuklinski with five.