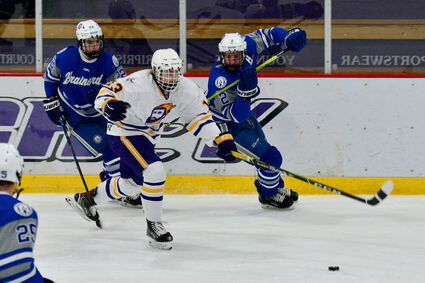 Cloquet's Patrick Dunaiski works to outskate Brainerd's Max Roby for control of the puck as the Lumberjacks take on the Warriors Thursday night in Cloquet.

Until last Thursday, the last time the Cloquet-Esko-Carlton boys hockey team played at home was Dec. 14. During that span the Lumberjacks went 0-5-1.

When they finally got a chance to play in the friendly confines of Northwood's Credit Union Arena, they didn't disappoint the hometown crowd with a 3-2 win over Brainerd.

"It felt like it has been forever since we played at home," said CEC coach Shea Walters. "We have had a tough stretch on the road so it felt really good to get back in our barn in front of our fans and get a win."

The Lumberjacks wasted little time in getting off to a good start as Patrick Dunaiski slipped a puck into the Warriors net just 19 seconds into the game, with assists going to Joey Antonutti and Karson Young.

"The goal was everything we have been preaching, which is guys driving the net, stopping on pucks and picking up the rebounds," Walters said. "It was a great goal with good speed. Good hand eye coordination with Patty knocking it out of the air. We needed to start fast and dictate the pace of play."

Before the first period ended, the Warriors tied the game at the 12:35 mark on a goal by Kaleb Estrada.

The second period was played with good pace, but the only goal was scored by Brainerd's Max Roby with 2:36 left. That gave the Warriors a 2-1 lead after two periods despite the 'Jacks leading 23-15 in the shots count.

"We got away from what made us good in the first period," Walters said. "We stopped playing physical and getting pucks in and going to work. We allowed them to control the play in the second period."

Things changed dramatically in the third period as the Lumberjacks came out flying and appeared to be laser-focused on winning.

"We talked about owning your shift every time you are on the ice," Walters said. "Do your job and win your battles. They took it to heart and played much better in the third and as a result we got a well-deserved win."

Dunaiski picked up his second goal of the game at 8:19 of the third with another assist from Antonutti and an assist from Lucas Rauner. CEC finally gained the lead when Wyatt Mrozik popped in a goal at 10:16, with Young getting his second assist of the game.

The work wasn't over for the 'Jacks as they had to hang on in the final minutes while the Warriors tried to even the score. The Lumberjacks got a huge save from goalie Kyle Abrahamson when the two Warriors broke in on the net ahead of the defense.

"Abe made a save that not many other goalies can make," Walters said. "A bad turnover sent them in and he did what he always does. Kept us in the game and in this case sealed the win for us."

The Lumberjacks lost the next day at home against Stillwater. The team has been dealing with a number of complicated issues early in the year. 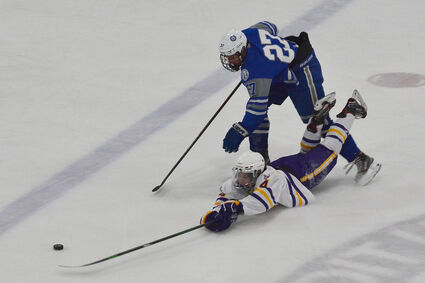 Cloquet's Wyatt Mrozik leaps past two Brainerd defenders to get a handle on the puck as the Lumberjacks defeated the Warriors Thursday at home.

"We are making steps in the right direction," Walters said. "We are not where we want to be but we are getting there. We have been sick and injured all year and our underclassmen have gained valuable experience. Fortunately, we only have a couple away games and a majority of our games are home games now, so that should help us stay healthy with less traveling."

Dunaiski, a junior forward, has been a big contributor lately, along with Antonutti and Young, a freshman.

"Dunaiski has stepped up the last few games and is giving us an offensive boost that we need," Walters said. Karson is a young and talented defenseman who is getting better with every game."

Antonutti had the lone goal in the 6-1 loss to Stillwater Friday. The Ponies outshot the Lumberjacks 33-15.

The Lumberjacks were on the other end the night before, outshooting the Warriors 40-20, including an impressive 17-5

advantage in the third period.