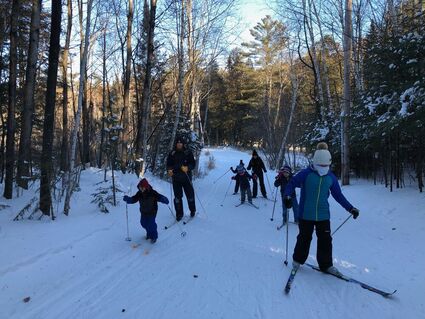 It was a cold, cold day - even at 1 p.m. - minus 8 degrees with modest winds. The chalet at Pine Valley was crowded with kids and parents. The Cloquet Ski Club's Jenny Barta ably led us through the outdoor practices to come, ensuring skis needing wax had received it. Based on parents' prior feedback, she divided us into groups with two volunteer adults leading five to seven kids each. Some parents joined in too.

No one seemed to mind the cold: the snow apparel was impressive and appropriate. Our group started off down the relatively flat trail to the right of the ski jump area. The kids quickly caught on to the diagonal striding movements, though poling was sometimes confusing. The greatest challenge was standing up again on skis after a fall, especially if we were on a hill.

It was a lot of fun. You could see how each child gained confidence and skill the hour that we skied. Our route included a fun downhill towards the end.

Skiing has been an important activity in my life since I was a child. My father, David Markusen, grew up in Cromwell. A lover of skiing, he placed me on skis at age 3, poised on the gentlest slope at Minneapolis' Theodore Worth Park. I couldn't make it down the hill. Not a pushy man, he said, kindly, "Don't worry – we'll try again next year." He did, and by the time I was 13, he'd enter me into youth races on cross-country skis. I even ventured down the tiniest ski jump and landed upright on my skis! We also did quite a bit of family downhill skiing.

Years later, my colleagues in the Economics department at the University of Colorado included me on backpacking trips up six or seven of the state's 14,000-foot peaks. We also climbed up on cross-country skis in the winter - I remember a terrifying descent on steep, narrow trails coming down from one of the Collegiate range valleys with a full winter pack on!

Since retiring from my professorship in 2009 and moving full-time to Cromwell, I've been enjoying winter sports: skating on the lakes when they first freeze over and cross-country skiing on our land and in the Fond du Lac Forest. For 20 years, I've been booking one of the cabins on Mic Mac Lake in Tettegouche State Park for a January ski trip. It didn't take me long to discover Pine Valley in Cloquet. Although it's a 20-plus minute drive from our home, it's my habit to ski there at least once a week.

Recently, Leah Peterson, one of our energetic local Ski Club leaders, gave me a copy of Tom Urbanski and Joe Nowak's "Pine Valley: The Park of Big Dreams" essay written for the Cloquet Centennial book in 2004. The authors recount how high school ski coaching in Cloquet dates back to the 1940s and '50s. Cloquet skiers won their first state championship title in 1951, then repeated the feat in 1952 and in 1958. With Nowak as coach, Cloquet won 12 jumping championships in 14 years.

Nowak, a decorated ski jumper who came to Cloquet in 1958 to coach and teach science, pushed for better facilities. He worked with the Northwest Paper Company and identified a 40-acre plot of land behind the Armory. Once the city accepted the land as a park and provided insurance, the paper company donated the land. Community businesses, groups and individuals worked together to create a ski jump and trails for skiing (and running/walking). The first jump was built in fall 1961. In 1962, Nowak approached the Cloquet Parks Department for a chalet, also built with lots of donated time and labor. In 1963, they added a 40-meter jump, built of donated steel from railroad company water towers, which were being dismantled.

While Nowak focused more on jumping, Cloquet High School ski coach Mike Marciniak led the development of cross-country ski trails at Pine Valley, adding new grooming equipment. Over time, the city and volunteers expanded and widened trails to accommodate skate skiing, added night lighting on a 2.5K loop, and expanded the chalet, doubling its capacity. In 2002-03, the ski club acquired snow-making equipment, covering the jumping area and short portions of the cross-country trail system. (It would be nice if the club or the city still had snow-making equipment available; according to jumping coach Ken Ripp, Cloquet is the only jumping club in the country that lacks the ability to make snow.)

Over the years, skiers who started their careers at Pine Valley have competed in competitions far afield: Mike Randall in the 1984 Olympics' Nordic Combined event; Patrice Jankowski in the 1984 and 1988 biathlons; Steve Flankey in biathlon in the 1979 World Junior Championships and in the 1980 Olympic Team Trials, among others. This year, Aidan Ripp competed in the Olympic Trials for combined jumping and cross-country events, televised on Christmas day.

This weekend the Cloquet Ski Club will hold its Invitational meet, with the jumping competition starting at noon Saturday, followed by the Nordic combined cross-country ski races. Spectators are welcome. For more on how to join in the weekend lessons for youngsters and/or other questions about the Ski Club, contact Leah Peterson at [email protected] The club continues to search for and buy equipment, but at this point, all skis, boots and poles are spoken for.

However, Pine Valley remains free to anyone of any age who wishes to ski, snowshoe, ride a fat tire bike or otherwise traverse the variety of beautiful trails. Just make sure you go on the appropriate trails: groomed ski trails are only for skiing; the bike trails are also for snowshoeing and hiking through the snow. Just follow the road to Pine Valley past the hockey shelters, and enjoy.

Columnist Ann Markusen is an economist and professor emerita at University of Minnesota.She lives in Red Clover Township north of Cromwell with her husband, Rod Walli.