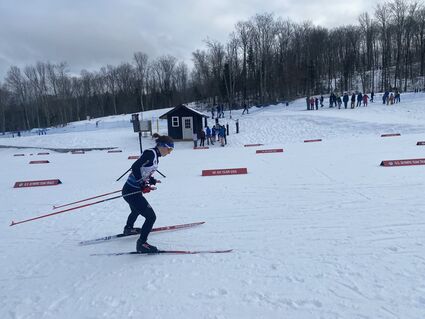 Aidan Ripp wasn't the only Cloquet athlete competing at Lake Placid last month - his younger sister, Charlotte, was hot on his heels.

Charlotte, a Cloquet High School junior, and her older brother both compete in the sport of Nordic combined, which includes both ski jumping and Nordic (aka cross country) skiing. Last month Aidan took 12th in the Olympic Trials (but only first place qualified for the Beijing Olympics next month) and Charlotte placed third at the Lake Placid U.S. Cup competition.

It was her second third, and good enough to qualify Charlotte to compete in the 2022 Nordic Junior World Ski Championships competition in Zakopane, Poland, on Feb. 28.

Charlotte finished fourth in jumping at the Dec. 29 event in the former Olympics venue, but skied her way into third place during the Nordic ski race, making up a minute and 30 seconds to take third, and almost second, place. To qualify for Worlds, she explained, a skier must place in the top three at least twice in a U.S. Cup series.

Not bad for a girl who started jumping on a 5-meter snow jump at Cloquet's Pine Valley when she was 3 years old.

Ripp is at the forefront of women competing in Nordic combined. It's not an Olympic sport for women yet. As a world sport, it lags behind jumping, which allowed women to compete at the Olympics for the first time in 2014, when Charlotte was 9. Now, at 17, Ripp is part of the USA Nordic Junior National team.

Charlotte competed against 12 jumpers and six Nordic combined skiers in Lake Placid. She knew all of them.

"Yeah, we've known each other since we were like 12," she said. "We met at Park City at different jumping competitions."

Her dad, Ken Ripp, explained that Charlotte would do smaller jumps when she was younger while Aidan was competing on the bigger jumps. Now she's on the big jumps too.

"It's a pretty select group of kids that can jump a 90 [meter jump]," Ken Ripp said.

Charlotte said it's a blessing and a curse having such a small group of athletes to compete against.

When asked to compare her chosen sport with other activities, Charlotte chose ballet and golf.

"With jumps it's about grace and balance, like ballet. You have to make it look as effortless as possible; there's power, but it's more about your ability to make something look easy," she said. "And in golf, anyone can take a club and whack a ball, but it won't go far unless your technique is good."

It can be scary, but she loves it. 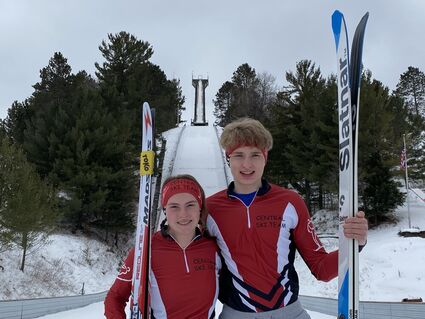 "Jumping is great while you're doing it," she said. "It's something you do, your entire life for a long time. And flying is pretty cool too - you can't do that with any other sport."

Charlotte is going to be doing distance learning for now as she trains more intensely for her World competition. The next U.S. Cup meet is in Eau Claire, Wisconsin, a ski hill she is very familiar with. She doesn't intend to rest on her laurels. "I'd like to win that one," she said.

Although Charlotte and Aidan Ripp have outgrown the jumps at Pine Valley, there are plenty of younger local ski jumpers learning the ropes. This weekend the Cloquet Ski Club will hold its Invitational meet, with the jumping competition starting at noon Saturday, followed by the Nordic combined cross country ski races. Spectators are welcome.