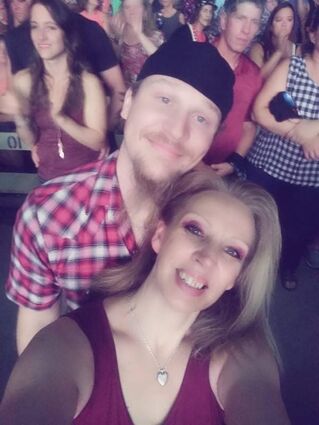 Drew Wallien and Stacy Lancrain in happier days, before Drew was badly injured in a hit-and-run accident Saturday. Friends have started a GoFundMe to help with medical expenses. Go to gofundme.com and search "Please Help Drew after tragic accident" to find out more.

Cloquet police responded to a 911 call of a man lying on the side of Highway 45 near Carlton Avenue around 5:40 p.m. Saturday, Jan. 15. The police statement said the man left the SUV after it went off the road, and stepped into the roadway. The driver of the other car, a 38-year-old Cloquet woman, turned around after the initial incident and returned toward the crash scene, ultimately hitting the man and driving away.

The victim's significant other, Stacy Lancrain, told the Pine Knot News they were run off the road by the other vehicle, and then the driver turned around and hit Andrew (Drew) Wallien, before fleeing the scene.

It was shift change time at the Cloquet Police Department, and an alert officer observed a vehicle that "looked like it was fleeing" on his way to work, according to police chief Derek Randall. "The officer was vigilant and got the information (about the vehicle)," Randall said, "They put the pieces together when he got to work."

In an interview with the Pine Knot News, Randall said police are getting conflicting information from both parties. One side says the suspect vehicle passed and then cut them off and that's how they ended up in the ditch; the other says the front car "brake checked" them and they had to swerve to miss them and accidentally sideswiped the car. One side says the driver intentionally hit Wallien, the other side says he lunged at their vehicle and got hit accidentally.

The driver of the vehicle that hit Wallien left the scene, that much is known.

The investigation is ongoing, Randall said, noting that they were still going through cellphone evidence and trying to gather as much information as possible. According to the CPD release, Wallien was conscious and able to talk to police after the incident. Anyone with information is asked to call the CPD at 218-879-1247.

"Situations like these don't just happen randomly," Randall said. "There was a reason these people got into a disagreement. It escalated quickly and turned tragic."

Randall asked people to allow the police time to do their job, referring to social media comments questioning the fact that no arrests had been made.

"We're confident the appropriate charges will be issued," Randall said. "The people on the sidelines need to be patient and trust that the process is going to work."

According to Lancrain, Wallien went through a total of 14 hours of surgery Saturday following the incident for internal bleeding and broken bones and was moved out of critical care Monday, and home Tuesday. She has three broken ribs and a bruised kidney, but is struggling to understand what happened more than anything.

"It breaks my heart and makes me more angry than I've ever been before," she said.

Lacrain said she and Wallien were uninjured after the initial encounter. They were leaving the Holiday gas station on Cloquet Avenue and headed home for Duluth, she said. She had been driving, and he came around to help her out and check the damage, she said. Then he saw the other vehicle had turned around and was coming back. It was snowing at the time.

"At this point, we thought it was an accident due to weather conditions," she said. "Then they swerved from the other lane and hit Drew, almost head on. I thought they were going to hit the car and the door slammed into me, that's where my injuries come from. I heard the car hit Drew and opened my eyes to hear myself screaming. I thought Drew was dead."

Wallien didn't have insurance and friends have started a GoFundMe to help with medical expenses. Go to gofundme.com and search "Please Help Drew after tragic accident" to find out more.