County K-9 is just 'part of the family' now 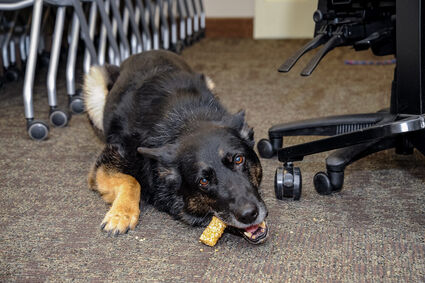 It had been three weeks since he'd been at work, and K-9 Roman practically danced from the squad car to the back door of the Carlton County Law Enforcement Center Friday.

Once inside, he got busy eating a generously sized dog treat, largely oblivious to the Carlton County officials preparing to honor the K-9 and his partner, patrol sergeant Tory Cawcutt, on the occasion of Roman's retirement.

Roman had been having some health problems, so the department officially retired him on Jan. 1. Trained for both narcotics detection and criminal apprehension/handler protection, the 8-year-old German Shepherd worked hard for Carlton County and other area agencies when called to duty.

Roman was oblivious to the pomp and circumstance as Lt. Dan Danielson read off a list of their accomplishments in the sheriff's department meeting room: more than 60 arrests over more than seven years, with drug seizures adding up to 1,587 grams of methamphetamine, 14 grams of cocaine, 1814 grams of marijuana, and 14 grams of opiates, including heroin and fentanyl. Roman is credited with seven "street bites," or apprehensions, and tracked and apprehended three individuals wanted for murder.

Cawcutt said the job brings with it a lot of added responsibilities, from ongoing training certifications to basically being on call 24/7, but it was a very rewarding experience. "I was really happy to be part of bringing the K-9 program back," Cawcutt said, explaining the sheriff's department had been without a dog for a couple years when they started, after having two dogs for a time.

"He's been a great dog, a great partner. I trusted him," Cawcutt said. "Everytime he was deployed to do his job, he did it well. There was mutual trust between both of us."

Roman also sneaked the first bite of the celebratory sheet cake Friday - uninvited - proof that the K-9 is, indeed, settling into a more relaxed frame of mind.

Roman's adventures Friday showed another side to the highly decorated K-9, who won a regional "case of the year" award for tracking homicide suspect Sheldon Thompson through the woods in March 2020. Tracking is different from trailing, Cawcutt explained. Roman uses ground disturbances and is trained to pick up on the freshest scent, so it's not a scenario where the dog sniffs an old sock and takes off running.

An arrest team accompanied them on that search, and a helicopter assisted once they got closer to the suspect, who was hiding behind a woodpile. Thomson is currently set to stand trial on five charges of first-degree murder and three charges of second-degree murder in May.

Roman and Cawcutt were also involved in numerous searches for missing people as well as more than 54 community engagement events at schools, clubs and neighborhood gatherings. Some of the school visits were public relations, others were for "locker sniffs." 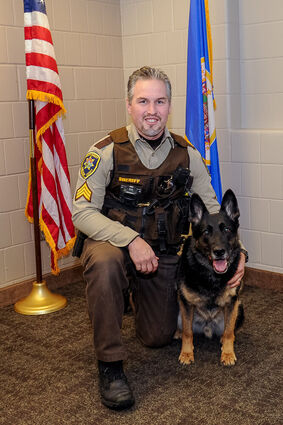 "He's a nice asset to have to bring out for community relations and also to show that the dogs aren't all aren't mean and scary; he's a happy-go-lucky dog," Cawcutt said. "He's got a lot of training and he loves doing this job, but he's got a very nice on-and-off switch for when he's working and when he's not."

While both Roman and Cawcutt are done with their active K-9 duties, Cawcutt will serve as K-9 supervisor in addition to his patrol sergeant duties, and will help select the next K-9 handler for the Carlton County Sheriff's Office.

In the meantime, Roman plays with the other Cawcutt dog (a bulldog) and hangs out with Tory's wife, AJ, and their two boys. Roman's always done that, but now he gets to do it all the time.

"He still gets a little anxious when I start putting on my uniform to leave for work, but there hasn't been an issue with transitioning to be a family pet," Cawcutt said. "He's been part of the family since Day One."