Sliding adventures of the Scanlon Rottensnots 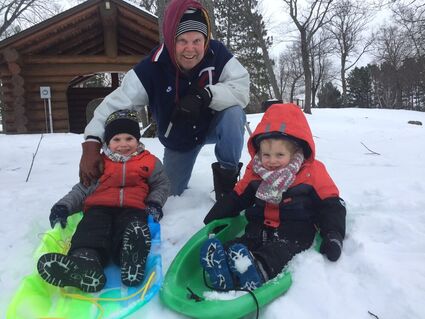 After writing this column, Steve Korby sends his grandkids on a safer sliding adventure than he used to enjoy in "the pines" as a child in the 1960s.

As I recently watched young, smiling kids riding down the snow-covered hill at Cloquet's Pinehurst Park, I thought back to the great times the "Scanlon Rottensnots" had sliding in "the pines" in the 1960s. Back then, 12 months out of the year, neighborhood kids played outdoors. "The pines" was land owned by Northwest Paper, and later Potlatch on 22nd Street. It had several different hills, and snow seven months out of the year. It is now the site of the Cloquet Middle School and the Rol Bromberg football field and track.

Kids from the northwest corner of Scanlon and the east side of Cloquet used to have fun in these particular woods year-round. In the summer, juveniles played army, built forts, and rode their bikes on the needle-covered trails. In the winter, it was mostly sliding, but in later years, some skiing and snowmobiling.

Sliding fun seekers had flying saucers and sleds for gliding down the hill. Some just used big pieces of cardboard or inner tubes. Several of us Scanlon pilots preferred wooden toboggans. With saucers, there were no operator instructions required. Riders were at the whim of the hill, and if they hit a tree, could be going forward or backward. Sleds had crossbar wooden controls at the front that could be pushed with feet or hands, depending on if the operator sat or lay on their belly on the sled chair. Toboggans were wooden vehicles with a curved wooden front and taunt ropes that ran from front to back. In the front, the ropes aided the driver in steering, and on the sides, gave passengers something to hang onto for safety. Later models even came with pads for sliding in comfort. My old toboggan had a significant piece missing from the corner back section. I never asked my older brothers why, or what caused it: I didn't want to know which tree was the culprit responsible for the accident.

Dressing appropriately was imperative. To be outside for several hours in a Minnesota winter required layers. My parents were firm believers in wool. Wool socks, green wool pants, wool hat, wool jacket, wool liners for choppers, and, of course, the underrated wool scarf. Now, I didn't qualify for any winter catalog pictures, but I was warm and dry. I think some clothes were hand-me-downs from the Depression, but they just never wore out. The beauty of wool is that even in powdery, fresh snow it rarely gets soaking wet - great for warding off frostbite or hypothermia.

Most sliders went down the bigger, main hill over the center section and walked up both sides of the hill. I remember it being a workout. Of course, the hill seemed a lot steeper and longer to be a fourth-grader. The hill, with lots of traffic, could get hard and packed, making it even more difficult to climb up, but fast going down. Some maniacs would try their luck bringing their roped transportation up the middle of the hill into downward traffic. It was usually a mistake.

Scanlon boys were always trying their geometric skills on designing slope alternatives. Friend Steve Heino and I would often bring shovels with us. One of the side trails through the woods had a big Norway pine, right in the middle of the proposed route. We'd use the shovels to build luge style banks and curves so our toboggans could avoid head-on collisions with trees. There were no helmets in those days, but we didn't have them for biking or even football either.

There would be the occasional boys and girls hurt and crying on the hills, but the Scanlon gang could usually console them and send them safely toward home ... until one time.

Tom "Maynard" Marciniak, of the legendary Marciniak skiing family, was ski jumping on another part of the hill when Heino and I were tobogganing. Knowing Maynard, he was probably using cross country skis. Someone alerted us Tom had fallen and was injured. They knew he was our good friend.

When we found Marciniak, he was in rough shape. Usually a jovial kid, he could hardly talk. The trail and homemade launching pad that he was jumping on was so narrow that a tip of his ski had gone a little awry while he was in flight and caught a tree branch. He was lying in the woods in obvious pain, with a broken ski by his side.

Now, remember, this happened before astronauts had set foot on the moon, so we couldn't just call for help. The only first aid training we had was from being in Scouts, and I don't think I had my merit badge yet.

We gently loaded Maynard onto my toboggan. I recall he was probably a third- or fourth-grader, and us a little older. He grimaced with each movement. Tom was short, so he could lie down on my toboggan. He wasn't a light load, and his home was about five blocks away. Our goal was to pull him and get him home.

Looking back, I don't remember much about the trek, but we're lucky Maynard didn't go into shock or worse. We found out later he had a broken leg. I still can't imagine how much it must have hurt, bouncing down 22nd Street and Sahlman Avenue while riding on a toboggan with a broken leg. I would feel bad if there had been permanent damage, such as making Tom a slow runner in all the sports he played at a later age.

Interesting, that I began this story recalling the fun we had 50-plus years ago sliding in the pines. The story turned when I started recalling the trauma and excitement of an otherwise uneventful winter event.

Writing this, I also thought I should brush the dust off my son's Batman sled that's in my garage and pull it out for my grandkids to use. The sled has no steering. I plan to take them sliding to Sunnyside Park, where there aren't too many trees. Right now, temps are substantially below zero. Coffee tastes good; maybe next week.