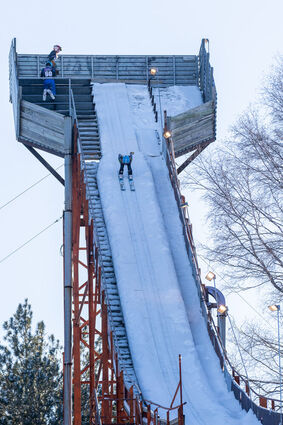 Simon Langer takes a run down the ski jump on the 40-meter hill at Pine Valley Saturday.

Saturday dawned cold and clear with just a light wind puffing some fresh snow out of the trees at Pine Valley in Cloquet. Mid-January turned out to be a perfect time for ski jumping.

By the time the youngest ski jumpers slid down the inrun on the 5-meter hill just after noon, the sun was relatively blazing, it was a balmy 12 degrees and the annual Cloquet Ski Jumping and Nordic Combined Invitational was on.

With more than 40 young competitors putting on their bibs to jump - and another 60 or so parents, organizers, officials and spectators gathered at Pine Valley - there was laughter and electricity in the air.

The competitors, kids ranging in age from 4 to 14, represented ski clubs from Cloquet, Grand Rapids/Coleraine, St. Paul, and Ishpeming, Michigan. The competition would serve as an early ski jumping experience for the youngest, and measure the progress of the more veteran jumpers.

It was a beautiful day, and kids did what kids will do in the snow, which is mostly play. The rope tow was busy pulling skiers to the top of the hill where they would turn, not right to the bigger 10-, 20-, and 40-meter ski jumps, but left to the trail leading back down to the chalet and the bottom of the hill. Then they would go back up the tow, the cycle repeating again and again.

Parents and event volunteers chatted casually in what is a close-knit ski jumping community.

But there was serious business to take care of, competitive business, and the 5-meter hill was center stage.

Officials Kim Larson, Mike Sobczak and Scott Sobczak positioned themselves at the K point to scrutinize the jumps of the littlest competitors, ages 3 and up. Parents and older kids gathered around the jump to offer encouragement. For the bigger jumps, the judges move to a stand next to the hill. They score each jumper for form and style, along with distance (which is called by volunteers standing alongside spray-painted measurements in the snow on the larger jumps).

"It's a great showing, a lot of kids, and great fun when we can actually be ski jumping," said volunteer Cloquet coach Nathan Langer.

Langer spoke about the history of area ski jumping - the Pine Valley jumps are 60 years old now - and the presence and support of the Denney family of Olympic ski jumpers from Duluth, along with the Sobczaks, who jumped for Cloquet in its heyday, when the high school team won 12 jumping championships in 14 years.

"We have a link to the past with jumpers from previous eras," Langer said. "It's a sport that's been around for a long time and I think it does a pretty good job of connecting the present with the past, and that's pretty fun."

Langer has three kids who ski jump and cross-country ski (the two events comprise the sport of Nordic combined): Isaiah, 12; Simon, 10; and Frances, 7, who has been ski jumping since she was 3 years old.

The competition for older kids moved on to the bigger 10-, 20- and 40-meter hills (as the younger ones took to climbing to the top of the stairs next to the 20-meter hill and sliding down through the deep snow on the seat of their pants). Competitors jumped each hill twice, climbing up and then zooming back down, crouching low on the run and then springing off the end of the jump, trying for skis in a V-shape, arms back, head up, trying to delay the landing as long as possible.

Eight-year-old Dylan Hanson jumped both the 10- and 20-meter hills. This is his second year ski jumping. When asked what her favorite thing about ski jumping is, she beamed, and said, "When you jump it's just having fun, and especially in competition you get to show all these people that you're really worth it."

Dylan's dad, Cloquet Middle School band director Ryan Hanson, was there with mom, Crimsen Hanson, a fifth-grade teacher in Cloquet. This is their first year volunteering with the Cloquet Ski Club. Crimsen sang the national anthem to open the event at noon, and also served as the public address announcer. Their 6-year-old son Dennen had just completed his jumps on the 10-meter hill.

"The kids started getting interested because of Cloquet's program, where you can rent skis and do cross-country skiing," Ryan said. "Then they learned how to do downhill skiing with the tow rope and then got interested [after] seeing friends going up and doing the ski jumps." 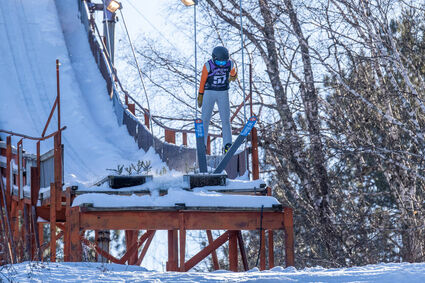 Jacob Larson from the St. Paul Ski Club flies off the ramp for his first attempt on the 40-meter hill at Pine Valley.

He summed up what many parents feel across generations at Pine Valley. "It's a good family experience."

Jumping was followed by Nordic ski races - with racers starting in the order of their finish on the jumps - to complete the Nordic combined competition.

Langer said the meet was a success.

"All the kids had a lot of fun and jumped really well," he said. "It takes a ton of volunteer hours to make this happen and we feel great about the result."

The Cloquet Ski Club is a volunteer club that promotes ski jumping and cross-country skiing for area youth. Membership dues are $35 a year for all skiers and an additional $40 fee for ski jumpers. Equipment rental is $5 per piece for the season, with registration every fall.