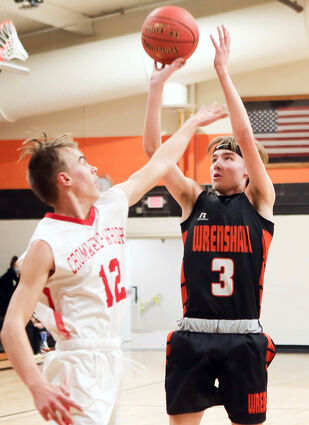 The second time was a charm Tuesday for the Wrenshall boys basketball team as they raced out to a 16-point halftime lead that eventually turned into a 63-49 home victory over Cromwell-Wright.

The win avenged a 65-55 Polar League loss for the Wrens Dec. 10 in Cromwell. That game featured more than 60 combined fouls, but this game was anything but, as the refs put the whistles in the pocket and called 24 fouls.

Wrenshall coach John Bartczak was impressed with how his team's defense answered the call Tuesday night. "We'd had a couple of tough games in a row, so we stressed good defense and it came through tonight. We executed well."

In the two games before Tuesday, the Wrens had given up nearly 160 points, so holding the Cardinals to 49 was certainly welcome.

On the offensive side of the ball, senior Cory Despot's size and strength was used a bunch underneath in the first half as the Wrens (6-5) built a 40-24 lead at the break. Despot quieted down in the second half, but finished with 15 points. Sophomore AJ Olesen finished with 17 and senior Austin Larva used inside and outside shooting and free throw opportunities to score a game-high 20 points.

Cromwell-Wright (7-5), was without the services of three of their players who usually see significant playing time. The Cardinals managed to outscore Wrenshall 25-23 in the second half, but could never cut into the Wrens' first-half lead. 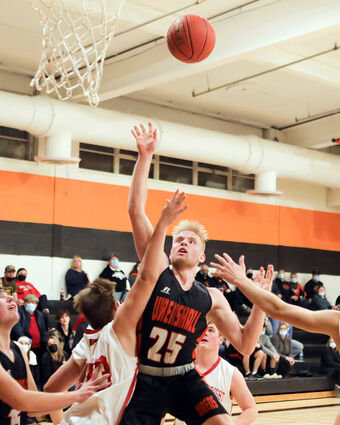 Wrenshall's Austin Larva shoots the ball in traffic during Tuesday night's basketball game with Cromwell. Larva led all scorers with 20 points in the game.

"I thought our kids did a good job competing in the second half," said Cromwell-Wright coach Bill Pocernich. "If we had rebounded and shot better, we would have had a good chance to win. But credit Wrenshall for taking advantage of our weaknesses tonight."

"They were without a few of their players, I get it," Bartczak said. "The Cromwell and Carlton games are the ones we look to on the calendar each season as some of our biggest, so we appreciated the win tonight."

Wrenshall's next three games are on the road, including a Friday night conference tilt in McGregor. Cromwell-Wright travels to Silver Bay Friday.