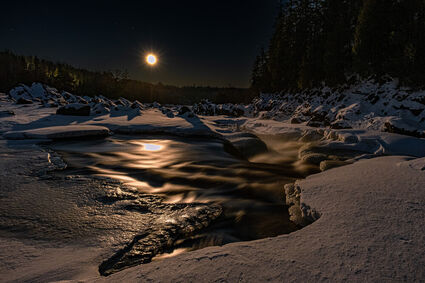 Our frigid winter can only be soothed by embracing it. That's what Dan Malkovich of Cloquet was doing last week as he ventured out to Jay Cooke State Park for some night photography of the waning wolf moon. "The full moon in January, called the wolf moon, was hidden by an overcast sky" on Jan. 17, he said. "Here is a picture taken the next night, when the sky was clear and the moon was 96-percent full. Compared to our eyes, the camera has superior ability to record even low amounts of light, turning this view of the St. Louis River in Jay Cooke State Park into an eerie fantasyland."