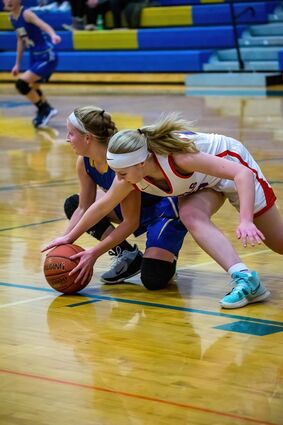 Players scramble for a loose ball during the game Thursday night.

A stifling defense and a steady offense created a potent mixture for the Esko girls basketball team in a 69-22 home win over a depleted Moose Lake/Willow River on Thursday, Jan. 20.

Many of the Rebels' best players were not on the floor due to Covid-related contacts. "Taking those kinds of kids out of their lineup made slowing the rest of the group down easier," said Esko coach Scott Antonutti. "I thought (Maci) Kukuk had a nice first half, so she definitely became our focus quickly."

The Eskomos allowed just 15 first-half points as they jutted out to a 36-15 intermission lead.

And, as good as Esko was defensively in the first, they were even better in the second half as they allowed just seven points while scoring 33 for the 47-point victory.

"We did struggle a bit with their defense, and they had really good help defense, but we also missed some opportunities as well," said Rebels coach Zak Mathson. "The press they put on forced us to play quicker than we wanted to, and I think that's what led to turnovers by rushing our decision making. Esko has always been tough."

While Esko was shutting down the Rebels offense, Jayden Karppinen and Kyra Johnson provided a one-two punch, scoring 21 and 16 points, respectively.

"Karppinen had a great game against us," Mathson said. "She did it all: she scored in the paint and hit some good shots."

Kukuk led the Rebels with 13 points, 11 in the first half. "She had a nice first half and is an athletic kid that plays hard," Antonutti said.

Joining Kukuk in scoring for the Rebels were Jocelyn St. Pierre with five, while Lilly Petty and Marta Guajardo had two each. 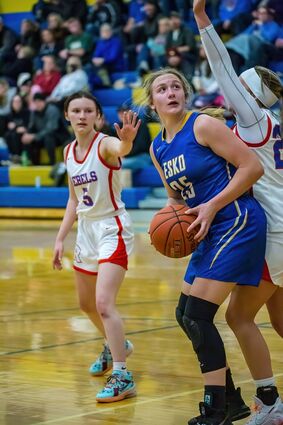 Esko's Kyra Johnson looks to see if she can make it to the basket.

"Halfway through the season we have had a lot of ups and downs," Mathson said. "With a really tough schedule mixed with contact tracing and not knowing who is going to play each week has been a struggle. We have had good games where our girls competed with some really good teams, just missing our opportunities at the end to close some good wins out."

Mathson said players would be back this week to mix with younger players who have gained some valuable experience. "I believe we can make a run in the second half of the season."

On Monday night the Eskomos followed up with another win, this time over a very good Mesabi East team. Esko took the home win 55-41 as Karppinen led the way with 23 points.