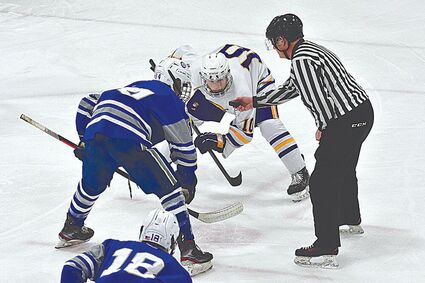 Earlier this season Lumberjack Patrick Dunaiski readies for a puck drop against Brainerd.

In their 10 games leading up to last Thursday's matchup with Duluth Marshall, the Cloquet-Esko-Carlton boys hockey team had struggled. They went 1-8-1 in that stretch and scored only 14 goals for an average of 1.4 goals per game. Last week the 'Jacks bounced back with a solid 4-2 road win over the Hilltoppers, followed by a Monday 4-1 road loss to Duluth East and Tuesday - in their best performance of the year - the Lumberjacks shut out Rock Ridge at home 3-0.

"Against Marshall, we absolutely needed that win," said CEC head coach Shea Walters. "Obviously, we had been struggling of late. We kind of broke it down player by player and we feel our guys played the best game individually that they had up to that point. And it was nice to find some scoring because manufacturing scoring has been a problem for us."

The Lumberjacks opened the first period with 18 shots on goal but came out of the period tied at 2-2. Marshall took a lead on a Joe Stauber goal at 7:50, but the Lumberjacks scored at 10:03 and 14:51 on goals by Pat Dunaiski and Wyatt Mrozik to go up 2-1. Mrozik and Dayne Painovich assisted on the Dunaiski goal and Carter Salo and Painovich assisted on the Mrozik goal. The Hilltoppers evened the score on a goal with 51 seconds remaining.

In the second period, the Lumberjacks scored the only goal when Painovich found the back of the net on assists from Lucas Rauner and Karson Young as they went up 3-2. The lone goal of the third period was scored on a shorthanded breakaway by Jace Stewart with the assist going to Rauner.

Monday night the Lumberjacks hit the road again: this time at the Heritage Center in Duluth, where they fell 4-1 to Duluth East in a game that was deadlocked at 1-1 after one period.

Goaltender Jacob Walsh did his best to keep the 'Jacks in the game with a number of dandy saves. The lone Lumberjacks goal in the first was scored by Dunaiski with Young and Painovich assisting.

In Tuesday's 3-0 home win over Rock Ridge, the Lumberjacks were stellar throughout the contest. They put a lot of shots on net and found a way to bury the puck when it counted most in the third.

"Like the Marshall win, this win was really important," Walters said after the game. "It was the most complete game we have played all year. Every line was good for us."

After the loss to East on Monday, Walters shook things up with four new lines in an effort to try and find scoring and to generate more chances. Monday his team generated plenty of chances by throwing 42 shots on Wolverine goal Ian Kangas.

"Our line combinations were good, and we played the right way," Walters said. "Every player played to the best of their ability and got rewarded for it."

Dunaiski picked up his 10th goal of the season to get the scoring started at the 14:45 mark of the first period with Painovich and Mrozik assisting as CEC went up 1-0.

There was no scoring in the second period, but CEC held a 32-13 shot advantage over the Wolverines. CEC was rewarded for its hard play when Antonutti was the beneficiary of a Wolverine mistake. After CEC dumped the puck into the Wolverine zone, Kangas came out of his net and went behind the cage to play the puck. As Kangas circled to the right of the net, he lost the puck - allowing the onrushing Antonutti the opportunity to poke the puck home for a 2-0 lead.

"We had talked before the game that we need to get pucks on the net in the hard areas, and we did that," Walters said.

The Lumberjacks completed the scoring with just 26 seconds left when Antonutti scored an empty net goal after bumping the Wolverines defenseman at the blue line, allowing the puck to come free in the CEC end of the ice to Gino Bertogliat, who grabbed the loose puck and found Noah Knuston streaking out to center ice. Then Knutson saw Antonutti racing free along the right wing, allowing for an easy goal for the 'Jacks.

Walsh recorded the shutout in goal, stopping all 20 shots he faced - including making some tough saves with the game still in doubt.

"That was the best game I have seen Walsh play as a Lumberjack," Walters said. "Even though we outshot them by a large margin, they had some good opportunities and Walsh was exceptional in those situations."

The win improved CEC's record to 6-12-1 with just six games remaining in the regular season.