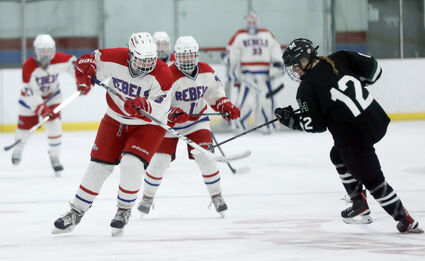 Notice has been served by the Moose Lake Area girls hockey team that they will be a tough team to beat come Section 7A playoffs. The Rebels gave the defending state Class A state champion Proctor/Hermantown team everything they could handle Monday night in a 6-3 loss in Moose Lake.

After skating to a 2-1 win over Duluth with a depleted roster on Thursday, the Rebels fought to a 1-1 first period draw Monday against the Mirage.

Proctor/Hermantown took just three minutes to score the first goal of the game when Izy Fairchild put the puck in the net. The Rebels knotted the score at 6:50 of the period when Sandra Ribich scored on assists from Hallie Klavu and Jorja Jusczak.

"I thought the first half of the first period they had us running around a bit in our own zone," said Rebels coach Reilly Fawcett. "They are a very fast team, and we were expecting that from them, but I think it took our girls a little bit of time to adjust to their speed. We tweaked a few things in our defensive zone, and we were able to shut them down in the first two periods."

The Rebels had a strong second period and were able to take a 3-2 lead.

Just 14 seconds into the second, Lily Ludwig scored an unassisted goal to make it 2-1, but the Mirage answered at 9:42 on another goal by Fairchild to even things up. With just 1:11 left on the clock, the Rebels took a 3-2 lead on a tally by Megan Hattenberger with an assist going to Klavu.

"We came out fast in the second period and scored right away ... which was huge for us," Fawcett said. "Our goalie, Mallory Hartl, came up with some huge key saves for us and our defensive core was strong. We knew that we had to play a solid defensive game and that is exactly what we did. We didn't have the energy or depth to be running around in our own zone, so we stuck to our systems and kept our composure."

MLA was able to hang on to the lead until midway through the final period, when the Mirage used their depth to start a comeback. At 5:45 Reese Heitzman scored with Nya Sieger and Karlee Gilbertson assisting on a backside goal that switched the momentum in favor of the Mirage.

"We started to run out of gas, and they scored a back door goal making it 3-3," Fawcett said. "With about 2:30 minutes left they got a lucky bounce off one of our defensemen and unfortunately it went in."

Moose Lake pulled its goalie, and the Mirage got an empty net goal. Then, with less than a minute left, Proctor/Hermantown was able to cause a turnover in the neutral zone and scored again. The two late goals were scored by Morgan LaValley and Mya Gunderson.

Despite the 6-3 loss, Fawcett said the Rebels proved to the hockey community - and maybe more importantly, to themselves - that they can skate with the top team in northern Minnesota.

"We knew that it was not going to be an easy game, but we knew that we could skate with them, and they are a beatable team," Fawcett said. "The strides that we have made in this season are tremendous. We lack depth and numbers, but we make up for it with our discipline and work ethic." 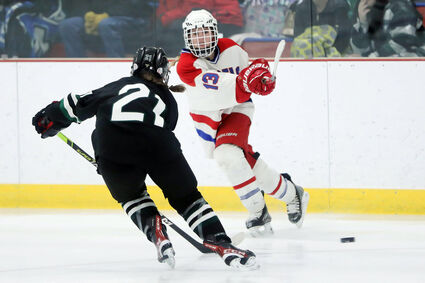 Keeping players on the ice is key right now.

"We have been hit with Covid pretty hard in the last couple of weeks," Fawcett said. "Last week we played the Duluth North Stars with 12 skaters, and we were able to squeeze an overtime win against them. That gave us confidence going into Monday's game."

"We are a versatile team, and we rely heavily on changing things up on the fly."

The Rebels are looking forward to the final stretch of the season. "We have been playing some of our best hockey in these past few weeks while overcoming many obstacles," Fawcett said. "I think our girls have been happy with how the season has progressed, but they will not settle. We are a team that never quits and fights until the end."

The MLA girls play at International Falls on Saturday. The MLA boys game against Proctor was rescheduled from Friday to Feb. 15.