Local musher is busy on and off Beargrease trail 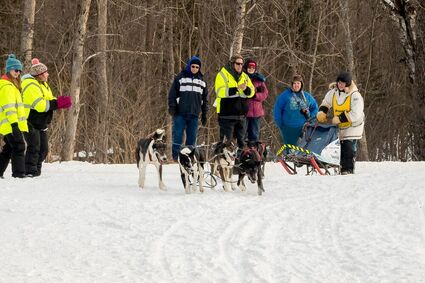 Cloquet's Billie Thompson finished fourth among 13 racers in the Beargrease 40-mile race with a time of 3 hours, 18 minutes and 54 seconds.

On paper, the 40-mile version of the John Beargrease sled dog race on Sunday looks like a real thriller. Racing times showed minutes and even seconds of differential in the top six places. But the quick race from the outskirts of Duluth to Lake County Highway 2 north of Two Harbors has a staggered start, so participants basically hung out as fellow racers came in and later found out the official times and places.

Among them was Cloquet's Billie Thompson, who finished fourth among 13 racers with a time of 3 hours, 18 minutes and 54 seconds. That was just more than a minute behind Ann Stead, who finished third, and nine seconds ahead of fifth-place finisher Susan Serafini.

Thompson said after the race that it was a fast track, if not just a little too warm for racing. The temperature was in the teens and 20s most of the morning Sunday as racers took off from Jean Duluth Road just north of Duluth near Billy's Bar. Those in the 40-mile race hit the starting chute last, after teams running the marathon and half-distance marathon took off with a raucous crowd lining the course.

"It was a beautiful day," Thompson said. She admitted that she doesn't have a lot of "superstars" on her team, thus her participation in the 40. She said one of her dogs came up lame, allowing Stead to pass her about a mile from the finish.

Thompson is on the Beargrease board of directors, so her mind wasn't only on the 40-mile. "I wasn't super-focussed on racing," she said. "There was a lot of work to do."

She stayed at the checkpoint in Two Harbors to help with timing and later up the trail. She finished her race at 3 p.m., found out the results about 5 p.m. and then went to work as a board member. There was no relaxing. "You get sucked into everything as a board member," she said. That included a first in August that Thompson ran, a charity golf event.

David Burge of Brookston, an Arkansas native who moved to Minnesota seven years ago, finished 10th in the 40. He works from home for the Science Museum of Minnesota and the Natural Resources Research Institute in Duluth.

He came into dog sledding when he and his girlfriend (now wife) volunteered on the Beargrease trail a few years ago. While on a honeymoon in Alaska the couple stayed at a cabin owned by a musher. They found themselves asking to help with the daily dog chores.

Burge said from the starting area that he had been training with his dogs since last spring for a short sprint race. The couple has 15 dogs. He said his biggest challenge is managing the unique personalities of the dogs and pairing them up to work together.

His lead dog and his backup got into a scuffle last week and he had to use other backups in the Beargrease.

Burge said the main goal of his first Beargrease was to have fun with the dogs. "At the end of the day, you are taking a trip with your best friends down the trail." 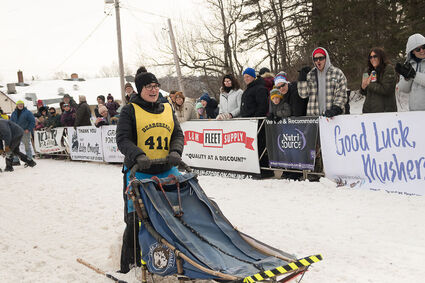 Thompson raced and did work afterwards for the Beargrease races as board member. Look online at PineKnotNews.com for more race photos.

Thompson runs 25 sled dogs out of Rock Creek Kennel. In her profile, she wrote that she was "trying my hardest not to go crazy between balancing being a mom to two crazy girls, a neuro/trauma nurse, and owning and running 25 sled dogs."

She was glad to be home on Tuesday as the marathon races continued on their way to Grand Portage.

The continued relatively warm weather - it was 30-some degrees along Lake Superior Monday and Tuesday - caused nearly half of the 24-team field in the 300-mile marathon to drop out. Slushy, sticky snow is hard on the joints of dogs, and mushers didn't want to overtax them.

Winning the marathon Tuesday afternoon was Ryan Anderson of Wisconsin, his fourth win in the race. The 120-mile winner on Monday was Rita Wehesler of the Finland area, where that race finished.

Esko writer and photographer Amy Arntson contributed to this story.