Lumberjacks have eyes on section 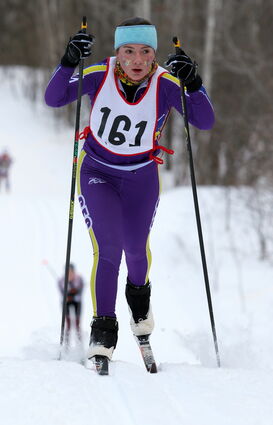 CEC's Ameila Allen makes a last push while cresting the final hill during the classic portion of the pursuit race during last week's race at Snowflake Nordic Center.

With the season-ending championship events just around the corner in mid-February, the Lumberjacks Nordic ski teams got a good look at where they stand during the Duluth East Invitational held at Snowflake Nordic Center Friday.

Ten of the 11 teams in Section 7 were competing, creating a showcase of the Nordic skiing talent in northeastern Minnesota. The Cloquet-Esko-Carlton varsity boys team finished fifth overall out of 10 teams, landing behind meet hosts and winners Duluth East, followed by Proctor/Hermantown, Ely, and Mora in second through fourth, respectively.

The Lumberjacks varsity girls team also finished fifth overall, trailing Duluth East, Ely, Grand Rapids, and Proctor/Hermantown. While the Greyhounds won with a commanding team total, the CEC girls finished within striking distance of the teams just ahead in the final results.

Once again leading the CEC varsity girls was senior Halle Zuck, who finished in ninth place overall in the pursuit race. Zuck posted a 5K freestyle time of 15:27 and a 5K classic time of 17:11 for a 32:38 total time.

The pursuit race format challenges skiers in two separate five-kilometer races with a short break in between. The format is the same as in the upcoming section and state championship meets.

"It was a good opportunity for our varsity athletes to do the pursuit format," said CEC Nordic Head Coach Arne Maijala. "We haven't had a pursuit race until now. It takes overall conditioning and our athletes who are cross country runners or swimmers are pretty well conditioned at the start of the season and that helps tremendously to prepare for a pursuit race. We do a lot of sprint loops and intervals at Pine Valley and that helps with the overall training for racing in general."

Rounding out the CEC girls team scorers were junior Jazlyn Gunderson in 27th place with a combined pursuit time of 35:07; senior Harmony Tracy in 28th place with a time of 35:10; and junior Megan Chopskie finished 29th in 35:26. The team had 11 total skiers entered in the varsity girls pursuit race.

"Halle did very well and overall, I was pleased with everyone's performance," said Maijala. "We had some younger skiers try some different things like moving up to the JV race to see how they would do." 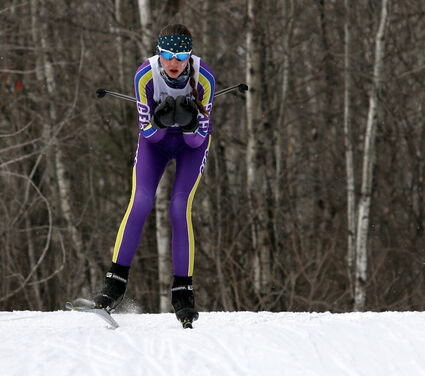 Aspen Berg (middle) settles into a downhill tuck and she builds speed heading toward the stadium finish.

The CEC boys also had 11 skiers in the varsity pursuit race.

"We have to make our selections for the new sprint relay event at the section meet as well as the pursuit race," said Maijala. "These last few regular season races help us figure out exactly where we're at. We've been telling our athletes how much we appreciate the effort they're putting in and encourage them to take care of themselves and try to stay healthy."