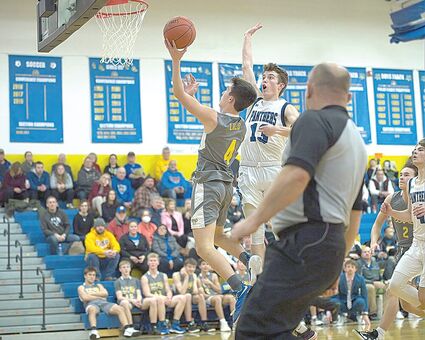 Koi Perich goes for a basket during the Esko vs. South Ridge game Friday night.

The Esko boys basketball team rode a big first half from Nick Swanson, solid defense and depth to a 78-36 win over South Ridge Friday night in Esko.

A big crowd was on hand to watch the speedy Eskomos take on the Panthers, who are perhaps the tallest team in the area.

"The band was there and there was a cheerleading camp that took place so all those kids were there and got to entertain before the game and during halftime," said Esko coach Derek Anderson. "It was a big crowd and a great atmosphere."

The first half saw the Eskomos run different variations of a full court trapping defense along with running and jumps of the ball in the forecourt which helped them to get turnovers.

"Nick Swanson got hot in the first half and hit five 3-pointers for us," said Anderson. "We got some stops on defense and pushed the ball. When we got it inside and they collapsed, our guys kicked it out to Nick, who buried his chances."

Swanson finished with 15 first-half points as the Eskomos rolled to a 51-21 halftime lead. Many of Swanson's points came when Koi Perich attacked the paint and then kicked the ball to Swanson for the long range bombs.

Also in Esko's favor was the fact that the Panthers Austin Josephson, who stands 6'10", was in early foul trouble and was not on the floor enough minutes to be the difference maker he usually is in a game.

"We know they have those big kids inside so we really wanted to have high tempo and not let them get into their half-court offense," Anderson said. "Both Koi (Perich) and Cuinn (Berger) have been big parts of our success so far this season along with the great depth we have." 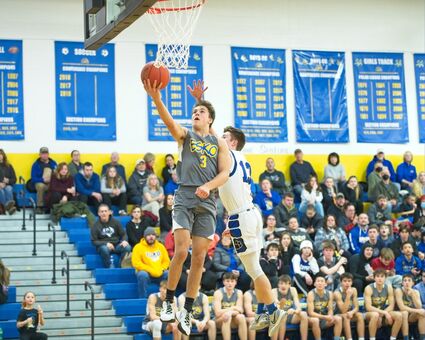 Brett Lillo goes for a basket during the Esko vs. South Ridge game Friday night.

Swanson ended up with 15 points and did not score in the second half for Esko, while Perich led all scorers with 23 points. Berger chipped in with 18 points, Carter Zezulka added five points and it was four points each for Bret Lillo, Mason Perich andChad Hart. Keone Anderson and Carter Herman both finished with two and Dalton Spindler scored one.

The win improved the Esko record to 15-2 with a big week looming. Wins against Pequot Lakes and Hermantown could see Esko gain a top 10 state ranking if they can pull off the sweep.

The Panthers dropped to 7-7 with the loss and also have a big and busy week ahead with games against Cromwell-Wright, Hill City and Wrenshall.