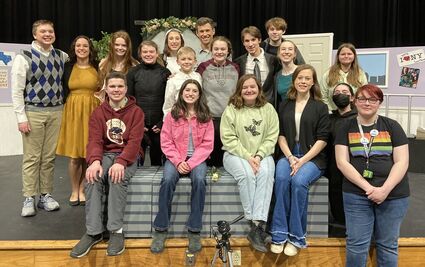 The cast and crew of the Esko's One Act play competed at the State meet last weekend for the first time in over 20 years.

For the first time in more than 20 years, the Esko One Act play team took its show to the state competition Friday. Before the team loaded their trailer and drove to St. Paul, their classmates and teachers at Esko high school held a sendoff for the One Act team.

"Most of us don't do sports, theater is kind of our jam," said actor Drew Prachar. "So to realize we made state and now we get to run through the halls was pretty neat because a lot of us would never get that opportunity otherwise. It was just nice to finally be recognized and appreciated."

The team of around 20 Esko students had been preparing for their performance of the play "Back Cover" since early December. The team consisted of 10 actors, various stage crew members, a stage manager and a student director.

The One Act is unlike other plays or musicals put on by the high school, according to co-director Joyce Bergstedt. It is governed by the Minnesota State High School League and its rules state that the team has a 35-minute time limit for their play and they are allowed 10 minutes to do a complete setup and 10 minutes for a complete takedown at the end.

In late January, the team competed in the sections tournament in Two Harbors, where the performance placed second. The top two teams were able to move on to the subsection tournament, where only the top finisher is able to move onto the state competition. Esko hadn't been to state since 2001, appropriate since part of the play this year's team performs deals with 2001 and the terrorist attacks on the East Coast.

Actor Jillian Powers described the subsection win. "We were all holding each others' hands and we were so excited. We're like, OK, and then they called Esko for first place and everybody just started jumping up and screaming. We were excited, it was a shock."

"Back Cover" is about a young girl going through her parents' divorce who stumbles upon a box of letters from a young boy who seems to be going through similar problems. The girl, Madison, grows close to the idea of Jesse, the boy in the letters. The letters stop on Sept. 10, 2001, and Madison ultimately learns that the letter writer was killed in the terrorist attacks on 9/11.

Esko had just one week to prepare for the Class A state festival, which was hosted at St. Catherine University in St. Paul on Feb. 11.

At the state festival, the top eight teams, out of a total of 206 in Minnesota, performed their one-act plays for everyone in attendance with a panel of judges.

"Everyone's show was just fantastic. These are the best of the best," said stage manager Elliot Perlinger. 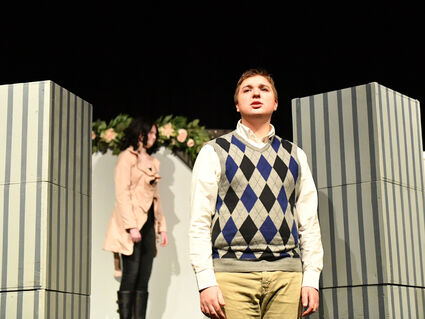 Jesse's voice emerges from the past through letters he wrote in 2001. Played by actor Drew Erickson, Jesse describes what he has heard about the World Trade Center attacks, as his father was starting a new job there.

At the state festival, judges do not rank the performances from top to bottom, like they do at sections and subsection tournaments. The judges award three teams "starred" state performances. Those included Dilworth-Glyndon-Felton for "Almost, Maine," Sauk Centre for "Dark Road," and Belle Plaine for "Mill Girls."

More than anything, state is a chance for the best performers in Minnesota to watch others perform and celebrate the hard work they put into their season.

"Everyone does such a good job that there's no need for ranking. What's really neat was that everyone there was so supportive of one another and friendly," Prachar said.

Cast members laughed about how portions of the story are set in 2001, the last year Esko went to state. But the team's biggest connection to the play - they were all, of course, born after 9/11 - was their own ties to each other during the season.

"At first we're all timid around each other, but by the end we just become one big family," Prachar said.