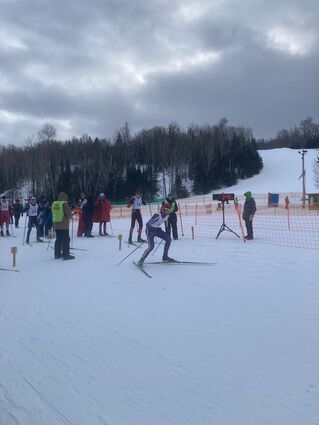 Cale Prosen starts the second half of the pursuit race at the Section 7 meet last Wednesday.

Sometimes an athlete just has a less than stellar day. Unfortunately for the Lumberjacks Nordic ski team, that happened to a few skiers Wednesday, Feb. 9 at the Section 7 Nordic ski meet. It meant the Cloquet-Esko-Carlton Nordic ski season ended at sections, with no CEC athletes advancing to the state meet this week, also held at Giants Ridge in Biwabik.

There were also other factors at play.

First, the weather: Conditions were soft, making it harder to ski.

Second, this was the first year of a new competitive format at sections, which included a two-person relay race on top of the usual two-part cross country ski race.

And finally, it was the first time CEC competed at sections without a handful of boys who had pursued Nordic ski training year-round and competed in Junior National Qualifier (JNQ) races under the tutelage of volunteer coach Ben Croft, and qualified for state as a team by taking second the past two years at sections. In short, they lost some star power to graduation last year.

"Nordic skiing is a very difficult sport to have everything all work out: from wax, weather, to personal health and stress that comes with qualifying competition," head coach Arne Maijala told the Pine Knot in an email interview last week. "I feel the new section and state format also made it more difficult for the skiers to focus this year. Change is sometimes good, but often difficult at first in anything."

Maijala said it was the first time in about eight years that no one qualified at what is one of the most competitive section meets in the state.

"I believe Anja Maijala and Erika Fox broke a long stretch of no qualifiers about eight years ago," Maijala said.

Although it was a surprise to not have any Lumberjacks heading on to state, Maijala said he was super proud of the team. His message, as usual, was to have fun, and do their best.

"I told all of them I was proud of them, and they should keep their heads up and to always keep skiing as a fun and active part of their lives," he said.

The addition of the relay race was a significant change to the section and state Nordic ski meets. The relay skiers could not be part of the pursuit race team, which expands opportunities for athletes but favors teams with a greater depth of talent.

Maijala explained the team's score is now calculated at about 60-percent pursuit and 40-percent relay for the overall score. Only three skiers count for the pursuit part instead of the usual four.

Maijala said he isn't sure about the changes in format. 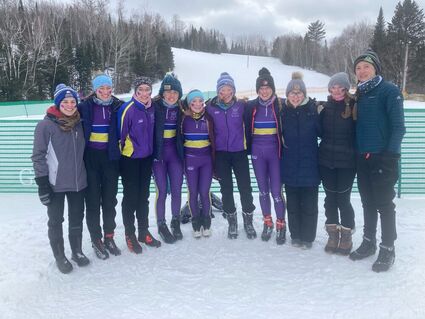 The CEC girls team finished in eighth place at the Section 7 meet.

"I do feel it does favor the larger schools with big teams," he said. "It also makes it challenging for coaches to know what is the best thing for their skiers to do."

They will be sorely missed, but the team will go on, Maijala said.

"We have a very strong group of middle school boys coming up and coaches see a huge potential with them," he said. "I am hoping to see this team keep improving through the years, and the ultimate goal is to keep Nordic skiing fun."