At age 100, Iris Johnson is one busy lady 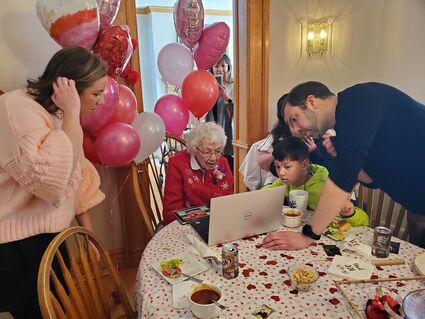 Barnum grad and longtime Mahtowa and then Cloquet resident Iris Johnson celebrated her 100th birthday the day before her birthday via Zoom and in person at her son Neil's house. He said she "navigates Zoom like a pro." Here, Johnson is pictured with her grandkids Melissa and Zach, along with great-grandson Anders. Granddaughter Heather is in the background capturing the moment.

Barnum native and longtime Mahtowa resident Iris Johnson turned 100 years old on Valentine's Day but, with typical modesty, she wasn't sure about being interviewed.

"My life was like watching paint dry," she told the Pine Knot News.

Not true. Johnson had all kinds of stories, and she tells them with charm and enthusiasm. She grew up during the Depression with her parents and a sister, in a house with a massive garden halfway up the Barnum hill. Her dad was a "truck farmer," she said, which meant he would deliver those fresh vegetables and berries to people.

She recalled going to school in Barnum, life with a party line phone, getting out of class to go to church one day a week, roller skating, babysitting, making good friends and meeting her future husband: Popeye Johnson. (His real name was Nestor, but nobody called him that.)

"He's kind of a legend," she said, then launched into the story of their first meeting, when he drove Iris and her classmates to their last picnic. Iris knew him by reputation: he was a good student and all around athlete and a couple years ahead of her in school.

"We roller skated twice a week at the community building at Barnum and he knew that," she said. "On the way home from the picnic, he asked if I wanted to go skating that night. Well, we skated the rest of our lives together."

Although Iris had plans to head off to college at Gustavus, Popeye asked her to marry him and help with the "store on wheels" he had purchased.

It was a large school bus that had been retrofitted as a store, complete with a cooler that he would plug in at night, and it would keep the meat cool all day long. He would sell dry goods, groceries, even clothes. Iris helped for a while, butchering and dressing chickens at one point, but once they started their family, Popeye found others to help keep the store rolling.

"If you were out in Blackhoof, Nemadji, Carlton, Cromwell, Moose Lake on a certain day, you would count on the store being at your door at, say, 10 o'clock, every week," Iris said. "You would never have to worry. You'd bring your list and you'd go back to your house with your groceries.

You might bring your kids too, because there was a candy counter."

They had that store for more than 20 years; then Popeye got into propane, starting the Mahtowa Gas Company, which he ran for 30 years. The store on wheels didn't last too long after they sold it, but it morphed into a more permanent store, forming the basis for TJ's in Mahtowa, Iris said.

"That potato sausage recipe was my husband's," Iris said. "He inherited it from the people who sold him the store."

She talks about how she and Popeye welcomed people into their Mahtowa home, including one of their sons.

"I birthed five children, but we inherited our son, Michael, by osmosis," she said. "It just happened, by God's will, I'd say. His name was already Johnson and he just fit into our family. We don't remember a time that there wasn't somebody extra who needed to live with us for a while. But Mike lived with us forever."

"I always say we sometimes don't recognize miracles, but you can't miss this one," she said of Michael coming into their house.

Iris Johnson spent her whole life in Carlton County, until moving to a senior living facility in Prior Lake about eight years ago to be closer to her son and other family members, and because she liked the gigantic complex, which includes a giant church and a movie theater.

She misses people and places, such as Salem Lutheran Church in Mahtowa, but she calls her new home "a little slice of heaven."

Iris doesn't offer any secret for living a long life. She lived through polio by pure luck, since there was no vaccination when she was young. She has lived through Covid so far, vaccinated this time. She didn't drink and, judging by her stories, she was a hard worker.

Maybe her secret is laughter. "Mom has a phenomenal sense of humor, she's quick to laugh," said Neil, her youngest son.

"She still quilts, sews, makes dolls from scratch with outfits," Neil added between sending photos of her birthday parties. "She'll bring six loaves of rye bread plus six dozen buns plus three pies plus a few dozen Swedish meatballs - all freshly baked in the previous 24 hours - to one gathering."

As much as anything, though, it's evident that Iris is a person who embraces life, and lives in the moment.

On the phone, she talks about watching workers remove the balconies from the senior living facility where she now lives, how amazing it is to see them "take a bite" out of a balcony and come back for more.

She talks about friendships, and the ways that people come together sometimes to make a difference in the world, even if it's just a little difference.

"I pick up on miracles. They work through somebody we know, how else does God work?"

She bemoans the fact that politics are dividing friends and family today.

"My dad was a staunch Republican, my husband the same," she said. "But that didn't enter into a friendship. But now it does. I like to say that part of it is that we have left God out of almost all of our lives." 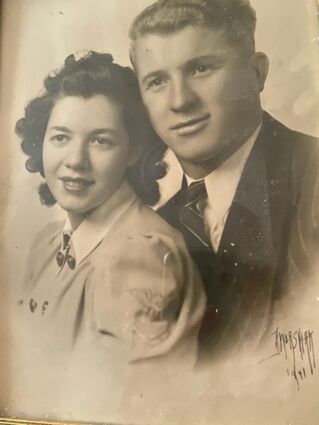 Iris and Popeye Johnson were married for 66 years and raised six children together in Mahtowa.

Family, faith and music have been her bedrock, but Johnson won't deny herself a little rebellion, like the time the building director told everyone to not sit on their balconies. She went out to decorate her balcony for fall and got busted. "I said, 'Melissa, you said don't sit. I'm not sitting,'" she told the director.

After her phone interview Friday, Iris was headed to the "every Friday" party, which turned out to be a surprise party for her, put on by lifetime friend Phyllis Tan, another Carlton County emigrant.

Don't be surprised if you get something in return.

"I have gotten so many cards already, and I'm a letter writer," she said. "I just want to live long enough to respond to all of them."