Esko SubZero robotics programming team lead Michael Cornell works with Isaac Wisted from design and fabrication team and Jordynne Wohling of the strategy department on the Drive Team at the 2021 Minne Mini competition earlier this season.

The Esko SubZero robotics team is preparing for its biggest season yet.

The team of more than 40 Esko students has been hard at work since early January, constructing a robot to compete at the Lake Superior Regionals Competition at the Duluth Event Entertainment Center on March 4, a FIRST (For Inspiration and Recognition of Science and Technology) Robotics competition.

"First off, robotics gets confused with battle bots a lot, but it's really not that at all," said team captain Ben Holt. According to Holt, the robots that teams build are not created to destroy each other, but instead to work together to compete through the game for the year as best as possible.

On Jan. 6, the game for the year was announced, and the team immediately began planning and constructing the robot they thought would best compete.

"This year's game is transit-themed and it involves a lot of ball shooting and at the end of the game you have to have the robot climb bars, that's kinda the main show and challenge," said Jordynne Wohling, another team captain and the strategy lead.

After learning the objectives of the game for the 2022 season, a full team meeting was held to begin the prototyping phase. Small groups of team members form to work on different parts of the process. There are teams for design, strategy, electrical, fabrication, programming, safety, and even students who deal with the finances and marketing of the team.

Programming lead and strategy team member Michael Cornell explained the team by saying, "If you imagine it like a jigsaw puzzle, we are all working on our own pieces, but if the pieces are too small or don't fit we have to work together to fill in all the gaps to make the whole puzzle come together as a team."

Following their first team meeting, the groups break off and get to work on the areas they are interested in. These students put in a lot of work. According to Holt, many students put in at least 10 hours a week, even if they participate in other extracurricular activities. The team members set a goal of 100 hours per team member before they compete at the DECC in early March.

"And that is honestly a really easy goal to meet for most of us," said safety and media captain Mikayli Marciulionis.

In mid-February, with less than 20 days until their first competition, team members were excited to finally watch the robot move unassisted for the first time on Monday, Feb. 14.

Strategy lead and programming team member Jack McWilliams said, "It's so cool when you get a final product down on the field and you see it doing stuff and you realize you helped make that."

Team members know that their competitions are expensive, and they're proud to be strongly supported by their community.

"That's another interesting thing about robotics, we do a lot of our own fundraising. The school gives us the funds for the starter kit and the entry fees for competitions, but we have to cover everything else. It can easily be up to $60,000," Wohling said.

The team is hosting a silent auction in April to help raise funds for their trip to Denver. Team members said excitement for robotics has grown in their community. They couldn't continue without the support and donations from community members.

Along with financial support, the team receives support from the many mentors and coaches who supervise the team throughout the season and offer assistance leading up to competitions.

"There's about 10 mentors and three coaches, we have a rotating cast of them who come in to support so we always have someone to help and answer questions," Holt said. 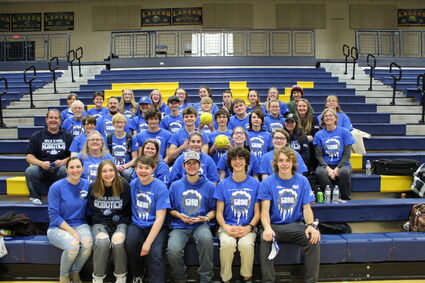 The senior leaders of the team are hoping to have a successful last season and are looking forward to taking what they have learned from the robotics team into their lives after high school. Many of the seniors are pursuing careers outside of the STEM fields, but recognized that the robotics team has taught them more than engineering and math.

"I'm going to college for construction management supervision, which has nothing to do with robotics, but being the fabrication lead put me in a similar position as a construction manager," said fabrication lead Jacob Majerle. "I've been able to lead my crew and I'll take what I've learned from my mentors and captains and use that in my future too."

Team members urge community members to stay updated with what the team is up to by following their Facebook and Instagram pages. Covid permitting, community members are also invited to attend the Lake Superior Regional Competition at the DECC March 4.