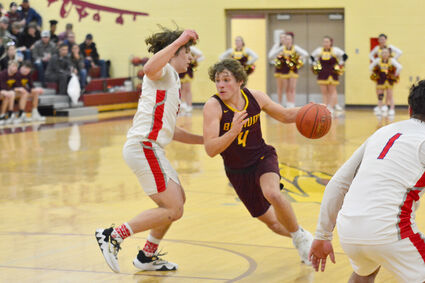 Barnum's Willie Richardson makes a drive to the net around ML/WR's Chance Lunde as the Bombers take the lead over the Rebels Friday night in Barnum.

When neighborhood rivals Barnum and Moose Lake/Willow River collided in a boys basketball game last Friday, the stakes were high and the crowd was in a frenzy. The Rebels had just come off an impressive road win over Cloquet the previous night and Bombers were on a six-game win streak. In the end, the Bombers rode a strong start and strong shooting to a 74-59 victory over the Rebels.

"We had great energy and stayed within our systems," said Barnum coach Rich Newman. "In the first half our shots were falling and it gave our guys a lot of momentum."

Barnum gained a 33-25 halftime lead as they lit things up from the outside.

"Barnum played a fantastic game against us," said Rebels coach Wes Cummins. "They shot 60 percent from 3-point range in the first half and they limited our scoring."

Leading by eight points at the half, Newman said his team was focused and determined in the locker room.

"Over the years, this has been our biggest rivalry and our team was real hungry," Newman said. "Our guys had never beaten this group from ML/WR growing up. I told them, 'Let's keep doing what we've been doing' and then we picked a few little things to focus on. They were calm and had an even keel. They were ready for the second half."

Led by Joe Peterson, who finished with 17 points, the Bombers kept up their hot hand in the second half and continued to pull away.

"At the end of the day, they just outplayed us," Cummins said. "Historically, Barnum has always played us tough defensively. They are physical and pack it in, making it hard to get to the basket. In the past, we've been able to hit some outside shots and open the game up a bit. However, we didn't hit shots and got stuck with the results." 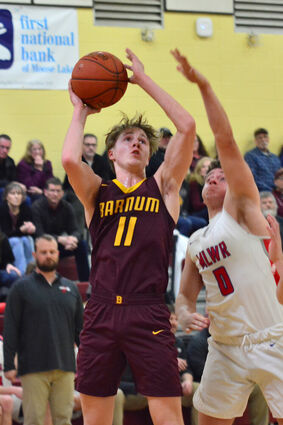 Barnum's Joe Peterson gets a shot off before ML/WR's Logan Overdahl gets a hand on the ball during Friday night's matchup between the Bombers and the Rebels. Peterson finished the game with 17 points.

Cummins said his team has struggled with injuries, quarantines and "a million other assorted events" this season. "Luckily, we got all our guys back now, and we've started playing better basketball," he said, calling the loss to Barum a "bump" in the road.

Beyond the big night by Peterson, the Bombers got 12 points from Willie Richards, 11 from Layne Wickstrom and Matt Berry had 10. JJ Stevens added nine, and Evan Gustafson scored eight.

"All we work on in practice is defense," Newman said after the game. "We worked hard on contesting shots and really wanted to keep Watrin off the boards. He can be a handful. Moose Lake/Willow River is a well-coached team, they have a couple of great shooters and they have a nice bench, but when we are playing well, we can play with anyone, and it was nice to see it happen."

The win improved the Barnum record to 17-5 while the loss dropped the Rebels record to 14-7.