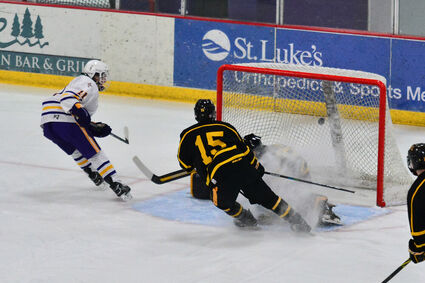 CEC's Noah Knutson gets the puck into the net for the Lumberjacks as they take on the Marshall Hilltoppers Saturday afternoon.

It took a total team effort, but the Lumberjacks boys hockey team eked out a 3-2 win in their home Section 7AA boys playoff game Saturday against Duluth Marshall.

The Cloquet-Esko-Carlton players wasted little time in gaining a lead. At 4:58 of the first period, sophomore defenseman Cooper Ellena gathered a loose puck in his own zone and moved it ahead on the right wing to Joey Antonutti. Antonutti raced into the Hilltopper zone and slid the puck across the crease to Noah Knutson, who slipped the puck past Marshall goalie Sam Anderson for a 1-0 lead.

CEC added to the lead five minutes later when Lucas Rauner fed the puck to freshman defenseman Karson Young, who drilled a slap shot over Anderson's shoulder for a 2-0 lead in the first period.

"We were able to get out to a good start," said CEC coach Shea Walters. "We were feeling it out a little bit, as it was a lot of our players' first high school playoff game. To go up 2-0 pretty quickly took the edge off and we were able to settle into our game. We were one breakaway goal away from opening up the game completely."

Early in the second period the Lumberjacks were buzzing and kept the pressure on the Hilltoppers with chance after chance, but Anderson stood tall and managed to keep the puck out of the Marshall net.

"We had one of our best shifts all season in that second period," said Walters. "We were rolling them pretty good, but we just weren't finding the back of the net. We were playing some of our best hockey but then the penalties started coming." 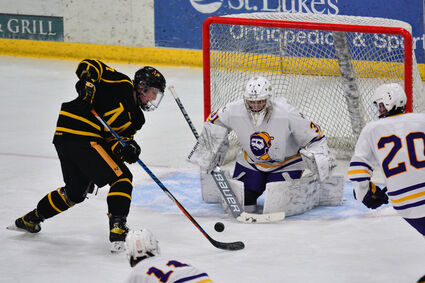 The Lumberjacks celebrate a goal by Noah Knutson in the first period of play Saturday against the Marshall Hilltoppers.

"The penalties stifled our momentum," said Walters. "We were playing good, hard hockey and unfortunately we found ourselves in the box.

We were able to kill most of them but their best player was able to find the back of the net."

The third period was an up-and-down affair with both teams having chances and both Anderson and CEC goalie Kyle Abrahamson playing well.

"Kyle was able to see the puck and cut down the angles," said Walters." It was one of the best games he has played all year, and we will need him to stand tall if we want to have success throughout the playoffs."