It was another good year for area Nordic skiers at the 2022 American Birkebeiner ski events held last Friday and Saturday in Hayward, Wisconsin.

Outstanding performances came from across a range of age groups, from high school-aged skiers and recent graduates on up to more seasoned, veteran skiers. Several local skiers were participating for the first time in a Birkie event, while others have been making the trek for decades.

In the Birkebeiner 50-kilometer skate race, Cloquet's Benjamin Bauer posted the best finish among local skiers with a time of 2:31:09, good for 85th place among men. Bauer's strong effort earned him a spot in the "Elite Wave" during next year's race, a starting place reserved for the top 200 finishers each year. At age 19, Bauer was the first teenager to finish among the elite competitors. A total of 3,839 skiers completed the 50K skate race.

Halle Zuck of Esko finished 104th overall among women in the 50K skate race in a time of 3:16:36. Zuck recently completed her final season on the CEC Nordic Ski team and now has successfully made the leap from shorter 5K races at the high school level to the marathon distance at the Birkie.

The high-ranking results spread up through the age groups, particularly in the classic races.

Three local classic skiers won age group divisions in the Birkebeiner 55-Kilometer classic event. Brent Smith of Carlton was impressive in winning the 65-69 age group, finishing in 3:23 and 60th place overall out of 1,642 competitors. Smith was 17 minutes ahead of the second-place skier in his age group and he earned a repeat spot in the Elite Wave for the Classic Race next year.

Kelly Rogers of Esko finished first in the women's 60-64 division of the 55K Classic Race, and Katherine Ellis of Moose Lake took home first place honors in the women's 65-69 division.

Excellent performances took place in the Kortelopet 29-kilometer races held Friday, when skiers traverse more than half of the same hilly course as the Birkebeiner races.

Greg Williams of Carlton's Thomson neighborhood won the 60-64 age group in a time of 1:51:07 and finished in 21st place overall among men in the Kortelopet. Williams' high placing earned him a spot in the Elite Wave of next year's classic race but he indicated he has crossed Lake Hayward for the final time.

Cloquet's Megan Chopskie finished in 13th place among women and 52nd overall in the Kortelopet Classic race. Chopskie, another CEC Nordic Ski Team member, finished the challenging course in 2:04:53 and earned a second-place finish on the podium in the women's 17-18 age group. Chopskie also earned a spot in the Korte's classic Elite Wave for 2023. 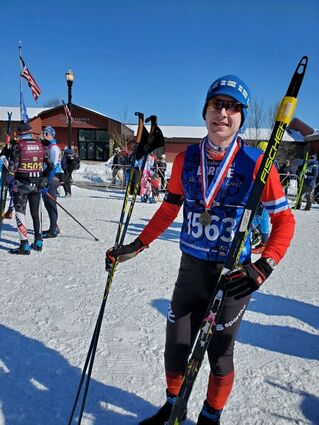 Cloquet 2021 grad and current UMD student Benjamin Bauer was the top area finisher in this year's Birkebeiner 50-kilometer skate race, placing 85th among all men skiers and earming a spot in the "elite wave" of skiers in next year's race.

As the largest Nordic ski race event in North America and one of the biggest in the world, over 11,500 skiers participated in 2022 Birkie Week festivities. Skiers from 47 states, Washington, D.C., and 16 countries competed in the various races last weekend.

Complete results and race information are available online at http://www.birkie.com.